HOOVER—Josh Britnell has joined the Spain Park High School administrative team as assistant principal, filling the position of Larry Giangrosso who was appointed as the high school’s new principal earlier this year. 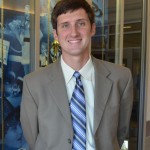 Before coming to Spain Park, Britnell served in the Shelby County School System as an assistant principal at Chelsea High School.

“I’m very excited to be in Hoover City Schools,” Britnell wrote in an Aug. 19 news release. “I am now starting my 11th year in education.”

Some of Britnell’s responsibilities at Spain Park will include discipline, attendance, teacher evaluations and school safety. Prior to his administrative roles, Britnell taught math for eight years at Homewood High School, he also coached baseball and basketball at Homewood.

Britnell has been married to his wife, Heather, for six years. The couple has twin boys, William and Joseph.