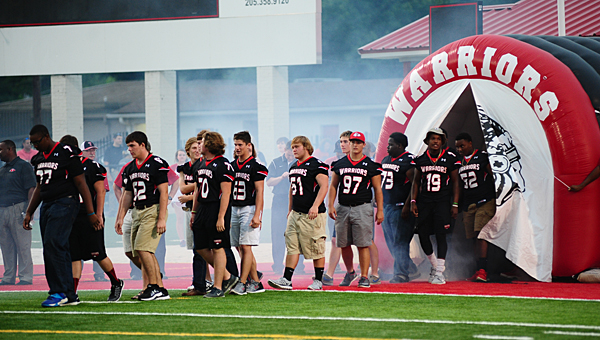 ALABASTER – Heavy rains and lightning held off just long enough for the Alabaster community to give its sports teams support heading into the 2015 season during an Aug. 20 community pep rally.

During the rally, which was held at Thompson High School’s Larry Simmons Stadium the night before the Warriors kicked off their football season against the Wetumpka Indians, several hundred Alabaster residents gathered to cheer the athletes.

“We want to send a message that at Alabaster City Schools, the third year is the charm,” Alabaster School Superintendent Dr. Wayne Vickers said during the ceremony.

The celebration featured performances by the THS marching band and visual ensemble, the Thompson Middle School and THS cheerleaders, the TMS dance team and majorettes.

Several local vendors set up on the stadium’s track, a crane hoisted a massive American flag over the field and the THS Junior ROTC presented the colors for the Pledge of Allegiance.

New THS head volleyball coach Judy Green introduced the THS and TMS volleyball teams, and said the teams will all kick their seasons off on the road on Aug. 27 before returning home for matches on Sept. 1.

“It’s a big night for all of us here at Alabaster City Schools,” Green said. “We’ve got a saying that we say every day, and that is ‘Win the day.’ The Warriors are going to win the day.”

The varsity Warriors football team walked onto the field through a fog-filled inflatable tunnel to applause and cheers from the stands.

“Tonight, we come together with all these wonderful programs on display,” THS Principal Dr. Wesley Hester said. “We are going to have a fantastic season and a fantastic school year.

“Let’s give all our teams and all our coaches our support for an incredible season,” Hester added.

Members of the Alabama Prep Sports Academy pose for a picture with kids from the Calera parks and rec department.... read more