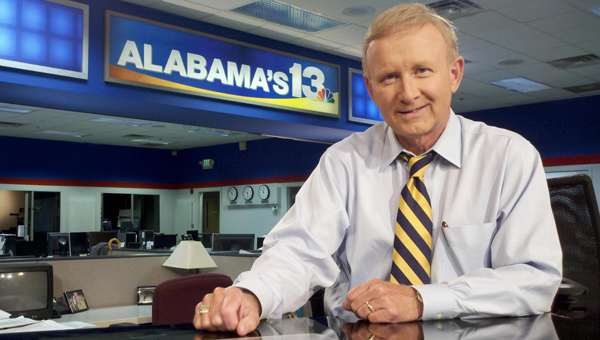 HOOVER—After 40 years in the television industry, Mike Royer has seen it all, both good and bad. The former longtime news anchor recalled his days broadcasting in Birmingham and discussed the importance of good news during an Aug. 20 Hoover Chamber of Commerce luncheon.

Royer left NBC 13 in June after 40 years in the business, more than 35 of which he spent broadcasting in Birmingham.

“You can do a lot in 40 years and you can observe a lot in 40 years,” Royer said, recalling some of his experiences on the job, from flying through a hurricane to interviewing the likes of former President Jimmy Carter, Lt. General Hal Moore, Jim Nabors and Nick Saban.

Although Royer looked back fondly on his days in television, he addressed some concerning trends he has witnessed in his experience, especially as business moved from local, family-owned stations to stations controlled by large national groups.

“There are some bad things about T.V. too… most stations are owned by big, national companies headquartered somewhere in New York,” Royer said, explaining many stations now present a “cookie cutter” newscast, consisting of mostly weather and crime followed by a story about the economy and perhaps health.

Royer produced “Spirit of Alabama” for 20 years, a weekly segment that focused on unique, good stories across the state.

“We still need good stories about every day people,” Royer said. “I met people while doing those stories (on Spirit of Alabama) that changed me and challenged me.”

Royer discussed the friendship he formed with Lou Wheeler through doing a story about the Campus Outreach ministry. Just before Wheeler passed away from cancer, Royer recalled his advice to “move from success to significance…make life better for someone else.”

Royer encouraged those at the Hoover Chamber of Commerce luncheon to make the best of each day and look for the good stories.

“I think once in a while… we need good stories to remind us there are a lot of really good people out there doing really, really good things,” Royer said.