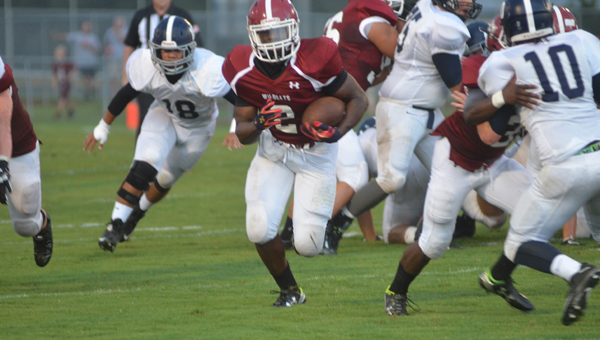 COLUMBIANA – Football is back, and the Shelby County Wildcats went a long way toward proving that 2015 is going to look different than recent years as they dismantled the visiting Jemison Panthers by a final score of 42-6.

While the final score showed Shelby County was the superior team by a country mile on this night, the game’s opening minutes were a different story. Jemison got the ball to start the game and was forced to punt, however, return man Deon Carter muffed the punt, and the Panthers recovered the ball inside the Shelby County 15 yard line. Shelby County’s defense held Jemison on three successive runs, but on fourth down and a foot, Robert Evans bulldozed into the end zone from two yards out. The Panthers missed the extra point, and led 6-0 with less than seven minutes left in the first quarter.

Shelby County proceeded to rip off 42 unanswered points the rest of the way on this rainy opening night. Recent Vincent transfer Aremee Calloway was a workhorse on Shelby County’s opening drive from the running back position, working the Wildcats down into the red zone. Quarterback Mason Blythe called his own number inside the five and scored standing up. The Wildcats led 7-6 after one quarter of play.

The next Wildcat drive produced more points as Jamarius Mayfield scored from 37 yards out, and after a Luis Lagos extra point, Shelby County led 14-7, which it took into the half. The Wildcats had another chance to score late in the first half but fumbled the ball away inside the Jemison 20.

Mayfield scored his second touchdown of the night just 22 seconds into the second half from 55 yards out to make the game 21-6. Jemison muffed the ensuing kickoff, and Calloway promptly scored from 25 yards out to make the score 28-6 before the crowd had gotten back from the bathroom. A Mack Slaughter touchdown with 12 seconds left in the third quarter all but sewed this one up. Trent Sullivan added a late garbage time touchdown with less than two minutes left in the game to end it at 42-6.

Shelby County is a run-centric team, and did not pass the ball a single time on this night. The Wildcats ran for 474 yards on 44 offensive plays, and 291 of those came from Mayfield and Calloway. Mayfield ran for 190 while Calloway went for 101. The Wildcats did fumble the ball seven times, although they didn’t lose them all.

“I think we played pretty well tonight,” Shelby County head coach Heath Childers said after the game. “I was proud of the kid’s effort tonight. I got to get back and me and the coaches are going to have to look at the film. You never truly know how good or bad you were until you look at film. But I was very pleased with the kids effort tonight.”

Shelby County will next travel to Helena on Aug. 28, while Jemison will host Chilton County the same night.