ALABASTER – A 21-year-old Alabaster man has been released from the Shelby County Jail on bonds totaling $22,000 after he allegedly distributed marijuana on two separate occasions in late 2014. 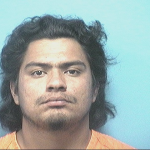 The Shelby County Drug Enforcement Task Force arrested Eriberto Cuevas Gonzalez, who lists an address Kent Dairy Road in Alabaster, on Aug. 19 and charged him with two felony counts of unlawful distribution of a controlled substance and misdemeanor charges of second-degree possession of marijuana and possession of drug paraphernalia.

He allegedly was in possession of a small amount of marijuana for personal use and several pieces of drug paraphernalia on July 7, leading to his misdemeanor charges, according to his arrest warrants.

Unlawful distribution of a controlled substance is a Class B felony, and is punishable by up to 20 years in prison upon conviction.

As of Aug. 24, Gonzalez had already had his initial court appearance, and was scheduled to appear in court on Sept. 23 to obtain legal representation.

Out of the box: Lucy Farmer’s creativity takes her across the country

Farmer often uses salvaged pieces in her interior design work. Pictured is the “man cave” she designed in her home.... read more