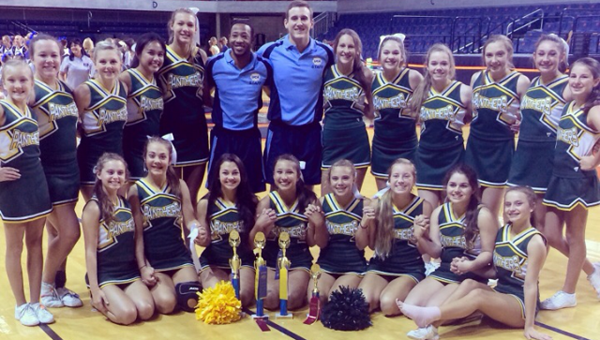 PELHAM— With football back in full swing, the Pelham cheerleaders are hard at work, preparing cheers and routines for the upcoming games. It’s a building year for the program, according to head cheerleading sponsor Jean Coker, but the program has 19 dedicated girls split between the varsity and junior varsity teams.

Pelham’s jamboree game was Aug. 21 against the Helena Huskies, and the girls were there to cheer on the panthers.

“I thought they did great,” Coker said. “They did some tumbling that was really good. It was very impressive. I want to see more girls get confident in doing that.”

Senior Lauren Schilleci leads the varsity team as captain with co-captain Madison Redford who is a junior this year. Coker also added a new position to the squads: Chaplain. Emily Hoang serves as the varsity team’s chaplain, and leads the team in prayer before games and practices.

The Pelham squads have been practicing through the summer to prepare for the upcoming year. Workouts began in July, and the girls practiced three days a week for two hours a day for five weeks.

They also spend two weeks working on tumbling at Pandora Gym in Pelham.

“I think it’s important,” Coker said. “We are so far ahead now than where we were last year. Last year we were still trying to learn cheers when football season started. Now we know the cheers and we know several routines.”

Coker also said it was important to her to bring the varsity and junior varsity teams together. In the past, the teams were completely separate, but junior varsity sponsor Samantha Simpson and Coker decided to blur the lines between the two squads.

Rather than attending the Universal Cheerleaders Association Camp at Auburn as two separate teams, the 19 girls competed as one Pelham High School cheerleading squad and brought home four trophies.

They won first place for extreme routine, first place in cheer, second place in sideline and overall best game day competition squad for the 6A division.

“Chelsea (High School) was really our biggest competition,” Coker said. “They had more girls than we did, but they only brought home one trophy. That was kind of our measuring stick as to how we were doing. When we walked away with four trophies and they walked away with one, (the girls) believed in themselves.”

The teams will cheer for both the football and basketball seasons before preparing for tryouts in March 2016. The new squad will spend the rest of the school year practicing for the UCA Camp at Auburn and will return to summer workouts in July.

The camp will be the biggest competition platform for the team until they can build enough numbers for a competition team in addition to the varsity and junior varsity teams.

“With us trying to rebuild the program, we are just trying to get through the season,” Coker said. “My plan would be to grow the program to where we could have a complete competition squad.”

Indian Springs cross-country up in numbers