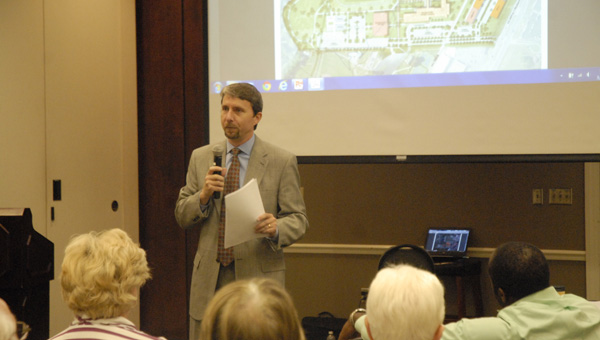 Pelham brought this project to the Birmingham Regional Planning Commission last year, mapped many things out and started putting together options for the area. Hayes said the project is still in the strategic process, and they have not nailed down exactly what the expansion will include.

“As we look at this, it’s a transportation issue, it’s a quality of life issue and it’s exercise and fitness for our residents,” Hayes said. “This is a concept to take what we’ve got and make it a beautiful city center for Pelham, which is something we’ve never had.”

The map Hayes showed attendees illustrated a boulevard that would be added to the current park and Hayes said it would “dress the whole area up.” The area would also include the new library, and Hayes said they have been working with librarians on this aspect of the project.

This will all be integrated as a city center area, which would also feature the new middle school and a Pelham recreation center.

“This is something we are really excited about,” Hayes said. “It will change the landscape of this whole area.”

The recreation center is something Hayes said people have expressed an interest in. The city has been working with Pelham Parks and Recreation staff on the building. The map included two outdoor basketball courts and sand volleyball courts.

“That is a critical thing,” Hayes said. “We need to do something for that and we are working through the details on that.”

Palmer warned the citizens about recent car break-ins and credit card fraud the department has encountered recently, and Coefield gave an update on the state of Pelham City Schools.

Waters also brought up the possible closure of Oak Mountain State Park due to budget cuts. He encouraged citizens to write to their legislators to support the park and keep it alive.

Shelby County Schools teachers from across the district have competed in the Design Star Challenge Contest. (File) FROM STAFF REPORTS... read more