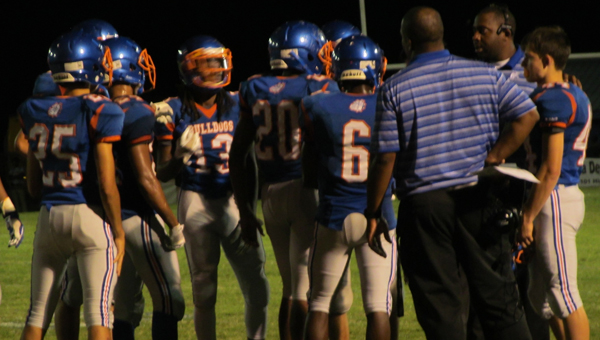 Montevallo gathers for a huddle during its’ 37-12 home opening rout of visiting Francis Marion on Aug. 28. (Contributed / Jordon Semien)

MONTEVALLO— Menacing clouds and distant lighting set the stage for an early season clash between the Montevallo High School Bulldogs and the visiting Rams of Francis Marion. Despite a long lightning delay, the Bulldogs early momentum ran them to a physical 37-12 home victory and a 2-0 start to their young season.

The Rams won the opening toss and deferred the choice to Montevallo. The Bulldogs took the ball first and cashed in on Francis Marion’s deferral, capping a 10-play drive with a six yard run from senior tailback Undreaz Lilly to take an early 7-0 lead.

A quick and hard hitting four and out for Francis Marion set the Bulldogs up at the Rams’ 21 yard line, before a fumble in the end zone gave the ball right back. Francis Marion got nothing out of their second opportunity, as their second drive of the night led to a short five play drive for Montevallo and a 13-yard run by Lilly for his second score of the night.

After a 10 yard pass from quarterback Zac Oden to Hunter Nabors and a pick six by Bulldogs linebacker and receiver Ahmad Edwards, the Dawgs had a commanding 27-0 lead before the referees called for a lighting delay midway through the second quarter. When play resumed, the Rams bowed their necks and got on the board thanks to a blocked punt returned for a touchdown, leaving the halftime score at 27-6 after a failed two point conversion.

The Bulldogs answered back to start the third, forcing another three and out before Oden found Edwards for a score from five yards out, and fan favorite Diego Martinez cashed in on a 25 yard field goal to take a 37-6 lead. The Rams found the end zone again but it would prove too little too late as the Bulldogs rolled to a 37-12 win.

After game, Montevallo Coach Andrew Zow took pride in his team’s resiliency out of the delay, saying “I’m proud of the team and the way they continue to fight.” But Zow still believed his squad came out a little flatter than he would have liked, adding “I still say we were able to battle and do some good things, but I really wanted us to maintain that intensity like we had at the beginning of the game”.

The Bulldogs are back home next week to face off with region rival Oak Grove.