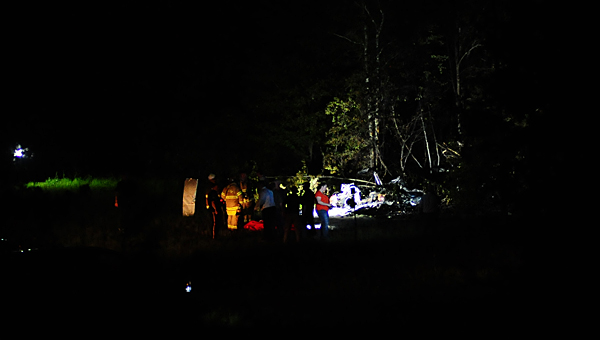 Emergency responders work the scene of a plane crash in a field slightly south of the Shelby County Airport on Aug. 27. (Reporter Photo/Neal Wagner)

“It’s pretty bad. It’s a bad crash,” Calera Police Chief Sean Lemley said while working the scene. “It is our understanding at this point that the plane was attempting to land.”

The crash happened shortly after 7 p.m. when the Cirrus SR-22 single-engine plane crashed in a field slightly south of the airport’s runway, and burst into flames after contacting the ground.

“At this time, we are securing the scene and holding it for the FAA,” Lemley said.

As of Aug. 31, the FAA had not yet determined the cause of the crash.

New said it took her office multiple days to positively identify the victim because the man’s dental records had to be sent to the Alabama Department of Forensic Sciences.

According to his obituary, flying was the activity Wyatt “he enjoyed most,” and he had been a certified instrument-rated pilot since he was 19 years old.

“John’s life’s calling was serving and walking daily as an unashamed follower of the teachings of Christ,” read his obituary. “John was not a man of many words but others saw his love of God through the way he lived and the things he did.He was a most remarkable young man who was loved and adored not only by his family but by people who he touched throughout his life.”

Lemley said several people in the area witnessed the crash, and many stopped and rushed to the crash scene in an attempt to rescue the pilot.

“We did have several (good) Samaritans that rushed in just to check and see if there was anything that they could do. It is appreciated that people did stop to try to help,” Lemley said.

One of witnesses who rushed to the scene was Alabaster resident Max Brown, who was driving on Shelby County 87 minutes after the plane burst into flames.

Brown said he called 911, and dispatchers informed him rescue crews had already been dispatched to the scene. He said one of the plane’s wheels had rolled north of the crash site toward the airport runway, leading him to believe the plane was attempting to approach the runway from the south.

“I saw a big plume of smoke, and I originally thought the (Central State) Bank was on fire,” Brown said. “When I realized it was a plane crash, I pulled over hoping we could help someone. But there was nothing we could do.”