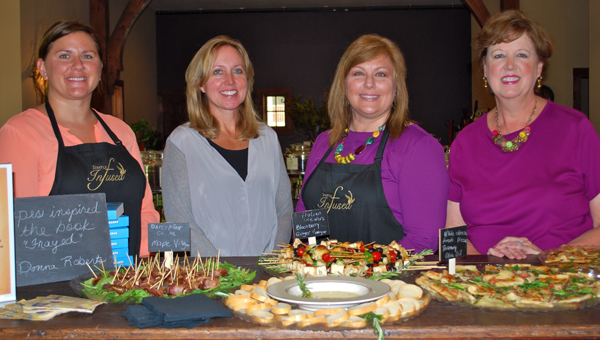 MT LAUREL—When Donna Roberts left her corporate job as an accountant to pursue her love of writing, she had no idea what the future would hold.

Now, just a couple of years later, Roberts has one completed novel under her belt, “Frayed,” with a sequel on the way.

“I never intended for this book to have a sequel, but I just fell in love with the characters,” Roberts said.

Roberts stopped by Simply Infused in Mt Laurel on Aug. 28 to meet with readers and sign copies of her first novel.

Set in Birmingham in the summer of 2014, “Frayed” follows the lives, romances and dramas of a group of women belonging to the same tennis club. The novel is fictional, however Roberts said events in the book were inspired by some of her own life experiences.

“Frayed” also pays homage to the many people who supported and helped Roberts during the writing and publishing process.

Some of the book’s minor characters bear the names of Roberts’ closest friends and fellow Alpha Gamma sorority members.

“Everything in the book is very personal… Every facet of it was helped by friends and family,” Roberts said, noting a sorority sister’s husband drew the cover image, a next door neighbor created the digital cover design and a friend edited the novel.

“Frayed” is available for purchase on Amazon.com. It is the first in what Roberts plans to be a trilogy.

FROM STAFF REPORTS CHELSEA – Drayer Physical Therapy Institute has relocated one of its 10 Birmingham-area outpatient centers to Chelsea.... read more