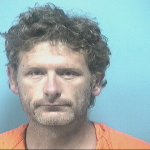 Ryan, who lists an address on Houston Drive in Pelham, was charged with first-degree manufacturing of a controlled substance and possession of drug paraphernalia.

According to SCDETF Capt. Kevin Turner, Kelley’s home was in foreclosure, and a representative from the bank allegedly discovered the “inactive” lab and called the Pelham Police Department July 5.

After investigating the scene and allegedly finding the ingredients and equipment for manufacturing meth, Pelham’s investigators contacted the Drug Enforcement Task Force.

Turner said the scene appeared to be an inactive “one pot” meth lab and had already been processed on July 8 when the team investigated the residence. Several items were confiscated and allegedly tested positive for meth.

Kelley was not located until Aug. 26 when he was apprehended. He is currently being held in the Shelby County Jail on bonds totaling $251,000. Kelley’s preliminary hearing is set for Sept. 24 at 8:30 a.m.

First-degree manufacturing of a controlled substance is a Class A felony and possession of drug paraphernalia is a Class A misdemeanor. According to Alabama state law, Kelley could spend up to life in prison if convicted.