Thank a veteran this holiday season 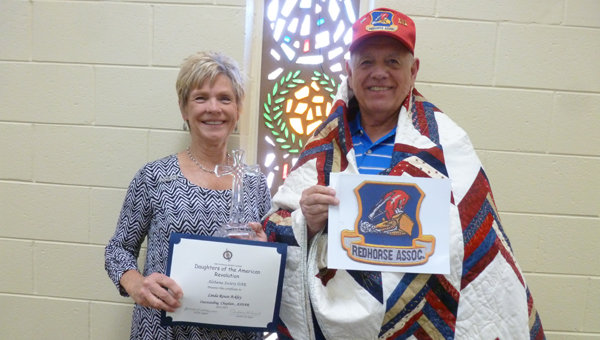 The holidays are a time for reflection and thankfulness, not only for our families and friends, but for this great nation in which we live.

May we never forget our military who fight, and our veterans who have fought, to keep our Republic the bastion of freedom in this world.

One light and one kindness kindles a thousand.

Vietnam veterans were thanked for their service at the Vietnam 50th Commemoration Ride and Day of Thanks at the Alabama National Cemetery and HOD Harley Davidson in Pelham on Nov. 7, sponsored by American Legion Matthew Blount Post 555, Exchange Club of Shelby County and ASDAR David Lindsay Chapter. (Contributed)

William Bradford, governor of Plymouth colony, said, “Thus out of small beginnings greater things have been produced by His hand that made all things out of nothing, and gives being to all things that are; and, as one small candle may light a thousand, so the light here kindled hath shone unto many.”

Linda Ackley of Shelby Shores, wife of Vietnam veteran Bill Ackley and chaplain of the David Lindsay Chapter of the Daughters of the American Revolution, started a tradition several years ago.

As a member of the DAR, her ancestor, Noah Bowen of Massachusetts, fought in the American Revolution and her pride in her ancestor and husband’s service is great. She made up small cards with the following message:

“Dear Military Veteran, Thank you for your service, sacrifice and commitment to the preservation of our freedom. A grateful American, David Lindsay Chapter, NSDAR Montevallo and Columbiana.”

“Whenever I see a veteran out in public wearing his colors, I hand him (her) a card and just say, ‘Thank you for your service,’” said Ackley. “I sometimes put them on their car’s windshields.”

Ackley’s simple idea has had powerful, rewarding results. The chapter has taken up her mantle to give out the cards.

Ackley won the Alabama DAR Chaplain of the Year at the ASDAR State Conference in 2015. This is the “power of one, a light produced by His hand.”

Vietnam veterans were truly shortchanged coming home from the war and were scorned in a politically anti-war time.

The “Vietnam 50th Commemoration Ride and Day of Thanks” was an event to publically thank and honor them.

This holiday season, may we all remember those who have fought, have died, are still missing and are currently fighting for this land of the free and home of the brave.

May we strive to never forget our veterans.