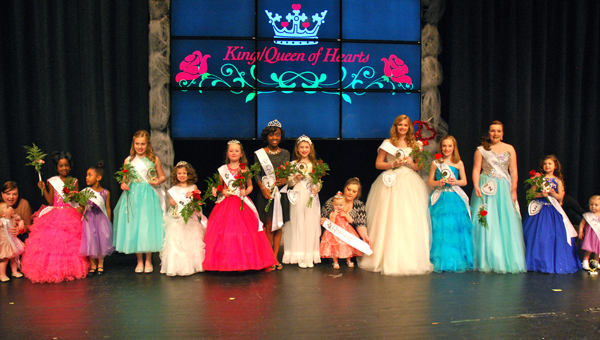 More than 20 young ladies, from four months to 13 years old, participated in the fundraiser pageant, organized by the OMHS Choir Boosters and benefiting the OMHS Choirs.

Grier Feldman, 8, was crowned the Princess of Hearts, while Avery Elizabeth Cork, 6, and Kennedi Ry’Leigh English, 6, were named first and second alternates respectively in the 6 to 8 years age group.

The day before the pageant, each contestant had an opportunity to practice and prepare on stage during a rehearsal. Throughout the pageant each girl was encouraged and supported by both the judges and OMHS choir students.

“There was a different confidence on the stage tonight,” Pageant Director Cassandra Callens said. “The girls seemed to have gotten a lot out of it.”

Not only did the pageant showcase some of Shelby County’s lovely young ladies, it also showed off the talent of the OMHS choir members. Students Meredith Hayes, Caroline Stewart and Evan Pezant each performed during the pageant’s opening, intermissions and closing.

“They helped with anything the pageant director needed,” Choir Director Michael Zauchin said.

The pageant’s proceeds support the OMHS choirs, helping fund anything from competition expenses to equipment.

“It funds anything that we might need,” Zauchin said.

Along with the help from the OMHS students, a number of dedicated volunteers helped make the pageant a success, Callens said.

“That really blessed me,” Callens said of the OMHS community support the pageant received.