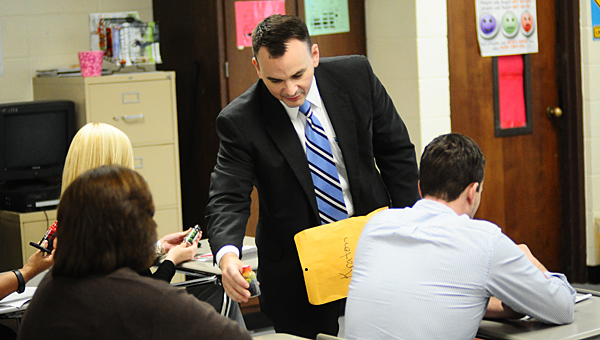 ALABASTER – Parents would be surprised how many different types of drugs have infiltrated Shelby County and its schools, the commander of the Shelby County Drug Enforcement told parents during a March 15 summit at Thompson High School.

Miller said kratom, which currently is legal in Alabama and is often sold in small plastic containers in convenience stores, is on the rise among youth, can have negative impacts and can lead to other drugs such as heroin.

Hammac said synthetic marijuana, or spice, sees widespread use among youth throughout the county.

“This is seriously an issue with our young people,” Hammac said, displaying photos of small foil packages containing synthetic marijuana. “We are seeing these in the parking lots of our schools and after football games. Synthetic marijuana is bad stuff, folks.”

Hammac said the synthetic component of synthetic marijuana varies in potency, and can lead to seizures, comas or even death.

“I will argue until the earth stops spinning that marijuana is a deadly drug. It’s cliché, but it really is a gateway drug,” Hammac said. “If I went to the Shelby County Jail and pulled out 10 drug dealers – I’m talking about really bad guys – and asked them what the first drug they used was, eight or nine of them would say marijuana.”

Before the breakout sessions, Dr. Shannon Murphy, a member of the American Academy of Pediatrics, said “marijuana is not harmless,” and said it is widely misunderstood in American culture.

Murphy said marijuana available today is much more potent than it was decades ago, said it is an addictive substance and said any medical benefits from the cannabis plant are derived from components of the plant, not by smoking or ingesting the entire plant.

“The gulf has never been greater between the scientific understanding of marijuana’s harms and the public’s misunderstanding,” Murphy said.