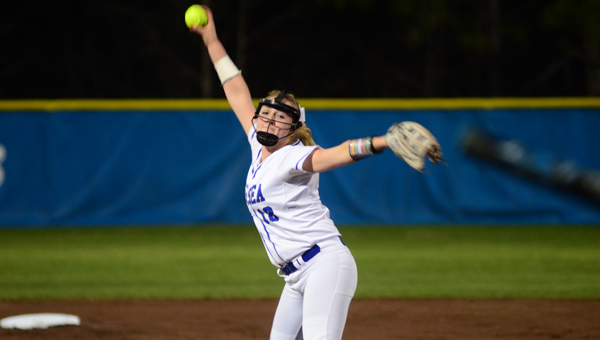 Spain Park came into its April 18 matchup with Vestavia Hills with the chance to lock up home field advantage for the 7A Area 6 softball area tournament. The Lady Jags were 4-1 in area play entering the game while Vestavia was 3-2, however the Lady Rebels beat Spain Park by a 4-2 final, creating a three-team cluster atop the area, as Spain Park, Vestavia and Hewitt-Trussville are all now 4-2 in area play.

Jenna Olszewski, back from an early-season injury, and Caroline Parker drove in Kynadi Tipler and Julianna Cross in the first inning to give the Lady Jaguars an early 2-0 lead. However those were the only runs Spain Park mustered for the game, and Vestavia scored three runs in the bottom of the fourth when Audrey Maloun scored via a Spain Park error and RaeAnn King hit a two-run bomb to take a 3-2 lead. Vestavia added another run in the fifth, and held off the Lady Jags the rest of the way, getting the win.

Spain Park, Vestavia and Hewitt-Trussville will hold a coin toss to determine which of the three will host the area tournament.

Calera ended its most successful baseball season in the last 15 years with two wins over Shelby County on Monday night. The Eagles finished the season 22-10, although they finished 2-4 in area play and did not qualify for the playoffs. Kevin Dowdell threw five innings in the first game against Shelby County, throwing 98 pitches and giving up two runs on no hits while striking out six as Calera won 12-2. Senior Matthew Marfice threw his last game in a Calera uniform on the last night of the season, throwing a seven-inning no-hitter to end his career. Marfice threw 138 pitches over seven innings, giving up no runs on no hits while striking out a whopping 14 batters. Zach Harris had two hits in the game as Calera won its final game of the year 5-0.

The 5A No. 3 Helena Huskies moved to 31-12 with two wins over Wetumpka on Monday night. Helena won by scores of 10-0 and 12-6, moving over the 30-win milestone on the year. Richard Fitts threw a complete, six-inning game, giving up six hits and no runs while striking out 10 in the first game. Riley Davis, Brooks Brophy and Sam Praytor each had two hits in the first game as well as Helena scored seven runs in the third and three more in the sixth to win the game early. The Huskies then plated nine runs over the first two innings of the second game, eventually winning 12-6. Brophy, Brett Walton and Robbie Lively all saw time from the mound in that game while Fitts led the way from the plate with three hits.

The Lady Hornets moved to 16-6 on the season and 3-1 in 6A Area 10 play with a 6-0 win over Pell City on Monday. The Hornets, the No. 4 team in 6A, clinched home field advantage in the area tournament with the win as well. Sarah Cespedes pitched a complete game no-hitter, throwing 111 pitches over seven innings, giving up no hits and no runs and striking out 12 in the winning effort. Cespedes, Mallory Heisler, Allie Miller and Alex Smithson each had two hits on the day as well to lead Chelsea in the 6-0 win.

The Evangel Christian Lightning beat Success Unlimited Academy twice on Monday by scores of 8-0 and 10-0 to move to 17-12. Hahn Hahn Lau, Cameron Kimbrel, Weston Akin and Max Shaw all scored in the first inning of the first game to give Evangel an early 4-0 lead, eventually winning 8-0. Jacob Albright threw a complete game shutout, throwing 88 pitches over seven innings, giving up four hits and striking out 11 in the winning effort. In the second game Evangel scored 10 runs in the first three innings of the game, winning easily 10-0.