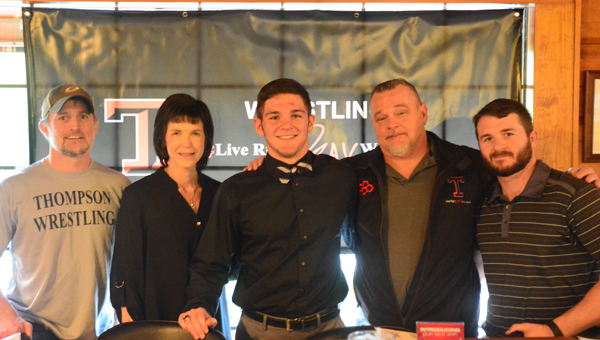 ALABASTER – Thompson senior Hank Turner will further his athletic career at Shorter University, outside of Rome, Ga., where he will join the wrestling team. After months of contemplating his college decision, Turner chose Shorter over King College in Tennessee, citing that the school just felt like a better fit.

“I have a couple of kids that I’ve wrestled with that go to Shorter that I know,” Turner said. “It just seemed like a better fit.”

Turner has been wrestling since he was six years old, but has only attended Thompson for his senior year, having attended Pinson Valley High School in the three years prior. Turner was unable to wrestle for Thompson this season due to the AHSAAs rule on transfer students, but has wrestled with the Warrior Wrestling Club for years and was familiar with their system upon entering his senior year.

While Turner was unable to take the mat for Thompson, head wrestling coach Shawn Weltzin was happy to have him in the Thompson program, citing his work ethic and willingness to prepare for the next level as that qualities that served him well at Thompson and the ones that will serve him well in the future.

“He was really open to just training this year in preparation for the next five years of his life,” Weltzin said. “It was really a good fit. He had been coming (to the Warrior Wrestling Club) for a couple years, so it was good to finally get him all the time. His strength is his work ethic, and if you have a goof work ethic that carries you around in every aspect of your life.”

Turner expressed his excitement about fulfilling a life-long dream and the chance to compete at a high level.

“It’s the highest level of competition you can reach as an amateur,” Turner added, saying he has wanted to wrestle in college for as long as he can remember.

Shorter is a Division II program that competes in the Gulf South Conference along with schools such as Valdosta State, West Georgia and West Alabama.