Lady Eagles to be No. 2 seed in area tourney 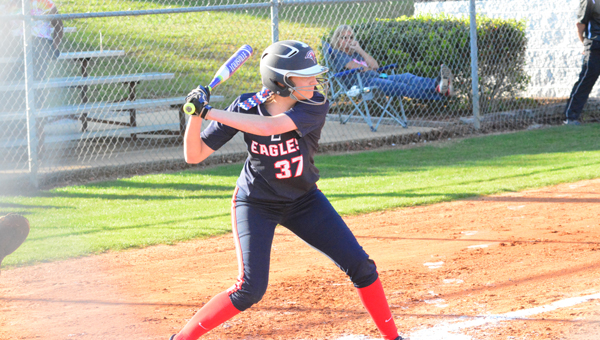 Abby Jones and the Oak Mountain Lady Eagles dropped a 4-3 game to Hoover on April 19 and will be the No. 2 seed in the 7A Area 5 tournament. (File)

HOOVER – Oak Mountain’s Lady Eagle softball team came into their April 19 game with Hoover with a 4-1 area record, and were playing for a chance to host the 7A Area 5 tournament. Hoover came into the game with a 3-2 area record, having lost previously to Oak Mountain on March 15 as well as a game to Tuscaloosa County on April 12. Hoover beat Oak Mountain on April 19 by a 4-3 final, moving both the Lady Eagles and the Lady Bucs to 4-2 in area play, and forcing a coin toss to determine which team got the right to host the area tournament.

The Lady Eagles scored all three of their runs in the top of the first inning. After Ashlee Sanders lined out to third to start the game, Maddie Katona was walked and O’Neil Roberson hit a single to left to put runners on first and second. Cassady Greenwood then came to the plate and smacked the second pitch she saw over the right field fence, giving the Lady Eagles an early 3-0 lead.

Abby Jones pitched a complete game for Oak Mountain, throwing 106 pitches over 6.2 innings while giving up four runs on eight hits and striking out four. Sanders, Roberson, Greenwood, M’Kiyah Mitchell and Bryson Campbell all had one hit for Oak Mountain on the day, while Greenwood had three RBIs thanks to her first-inning bomb.

The loss dropped Oak Mountain to 4-2 in area play while moving Hoover up to the same record. Because the two teams had split their series and both had split their individual series’ with Tuscaloosa County, a coin toss had to be used to determine which team was to be given the right to host the area tournament. Hoover won the toss and will be the top seed, while Oak Mountain will be the two-seed, Tuscaloosa County, which finished the season 3-3 in area play, will be the three-seed and Thompson will be the four, finishing the regular season with a 1-5 area record.

Per the AHSAA, softball area tournaments may be scheduled from any time between April 29 and May 7.