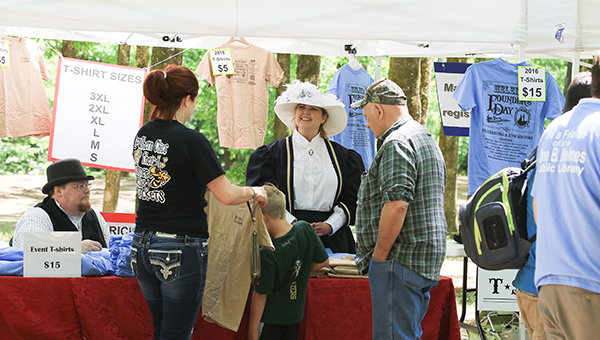 HELENA–Sunny skies and warm temperatures greeted visitors at the Helena Amphitheater in Old Town on Saturday, April 23, as Helena’s Founder’s Day gave residents a glimpse of the city’s past while enjoying a number of vendors and music.

For many Helena residents, it was their first time to attend Founder’s Day and the overall reception was positive as many enjoyed the trolley ride tour.

The trolley ride, which was new for 2016, gave a tour through Old Town Helena and gave residents background information on old buildings in Old Town as speaker Jay Riley explained the landmarks.

Helena Historic Preservation Committee member Shannon O’Guin was helping out throughout the day and said things were going well at the event.

“So far we’ve had a lot of positive feedback and the weather has been great,” said O’Guin. “I think people have really enjoyed the trolley rides and we’ve had a good turnout.”

Numerous merchandise and food vendors lined the banks of Buck Creek as residents strolled through the amphitheater while listening to artists such as Keith Elder, Thomas Trussell, Steve Norris and the Helena High School Choir.

Stephen and Courtney White happened to check out the Founder’s Day activities after spending the morning kayaking down the Cahaba River.

“We were kayaking down the river and happened to smell some funnel cakes and we knew we had to come check it out,” said Stephen. “It’s our first time being here but so far we’re having a good time.”