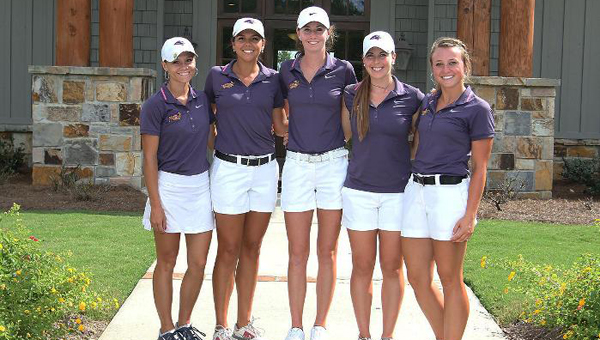 The University of Montevallo women’s golf team qualified for the NCAA Division II South Super Regional Tournament for the first time in program history, earning the No. 6 seed out of 12 teams competing. (Contributed)

Montevallo earned the No. 6 seed in the South Super Regional Tournament, which will be held May 2-4 at Stonebrook Golf Club in Pace, Florida. The University of West Florida will serve as the host of the super region tournament.

Montevallo captured the team championship at three events this season, including the Full Moon Invitational, the Cougar Classic and the Dancing Rabbit Invitational.

Eddy is second in the Peach Belt Conference with her 75.7 stroke average and owns six top-10 finishes and four top-5 finishes on the year.

Both Wood and Eddy finished in the top five in individual standings at the Peach Belt Conference Tournament while leading the Falcons to a third-place finish in the championship event.

The top three teams, along with the top three individuals not on an advancing team, from each super regional tournament will advance to the NCAA Division II Women’s Golf Championship.

The University of Montevallo women’s golf team is currently ranked fourth in the nation amongst Division II programs, the highest... read more