I-65 reopens after crash injures 2 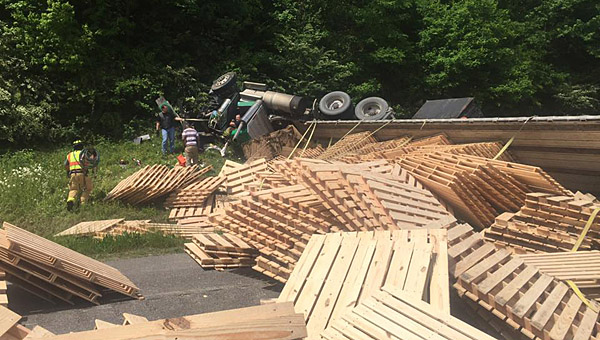 An 18-wheeler and multiple other vehicles were involved in an April 28 wreck on I-65 near the 237 mile marker in Alabaster. (Contributed/Alabaster Fire Department)

ALABASTER – Two people were airlifted with non life-threatening injuries and multiple law enforcement and fire agencies responded to the scene of an April 28 crash on Interstate 65 just south of the Promenade shopping center. As of 2:10 p.m., one lane of the interstate has been reopened to traffic.

The wreck happened shortly after 11 a.m. near the 237 mile marker of I-65 south, and involved an 18-wheeler truck and a passenger vehicle. The 18-wheeler, which was carrying a large load of wooden pallets, overturned in the wreck.

According to Alabama State Trooper Chuck Daniel, the driver of the passenger vehicle was airlifted to UAB Hospital shortly after crews arrived on the scene. At about 1 p.m., Daniel said emergency crews had removed the driver of the 18-wheeler from the truck’s cab, and were preparing to airlift the victim to UAB.

As a result of the wreck, law enforcement agencies closed I-65 southbound at exit 238 in Alabaster at about 11 a.m., and all southbound traffic was rerouted to U.S. 31 southbound, causing heavy traffic in the area. The interstate was fully reopened at about 2:45 p.m.