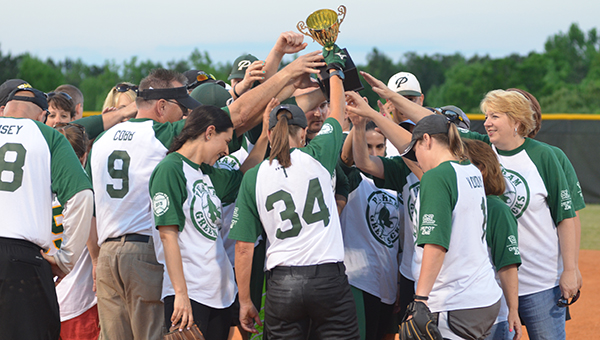 HELENA–Only separated by a few miles, Pelham and Helena makes for a natural rivalry game no matter the sport and on Tuesday, April 26, the Pelham “Green Sox,” comprised of the Pelham High School faculty, took on the Helena High School faculty members in the Second Annual Faculty Softball game.

Men and women faculty members from both schools laced up their cleats, dusted off their gloves and prepared to battle it out in a fun, relaxing environment to see who would have bragging rights for the next year.

In the inaugural game, Pelham had no trouble scoring numerous runs to defeat Helena, but this year’s game saw a much closer result.

Despite a valiant comeback effort that saw Helena score five runs in the final two innings, Pelham had a large enough lead to hold on to win the game 12-10 to extend their win streak to two games in the series.

The Helena Huskies softball stadium was filled with students and fans from both sides, and the Helena High School Marching Band provided entertainment to fans between innings.

Helena Mayor Mark Hall threw out the first pitch, and then the two teams prepared for the rivalry game.

Pelham got on the scoreboard first after Pelham softball head coach Sabrina Tutchtone tagged up from third base to score to put the Green Sox up 1-0.

Helena would respond as Helena softball coach Heidi Kouveras hit a two-run double to give the Huskies faculty a 2-1 lead. Later in the inning, Helena girls head basketball coach Allen Skinner doubled to score Kouveras to give Helena a 3-1 lead after the first inning.

Pelham responded with a couple of towering home runs and led 6-3 in the fourth inning.

Helena would not go down quietly as they responded with a two-run homerun, but after a bases clearing triple from Pelham, Helena still trailed 12-5 late in the game.

A late comeback effort by Helena was thwarted by the Pelham defense and Helena ran out of time to make up the large deficit as the Green Sox celebrated the victory.

After a group photo, the two teams and faculty members mingled and enjoyed hot dogs and refreshments to cap off the night.

Beginning with the 2016 school year, the Helena Huskies athletic teams will move up to Class 6A classification where Pelham will be one of the area opponents, and the two teams will meet more frequently.