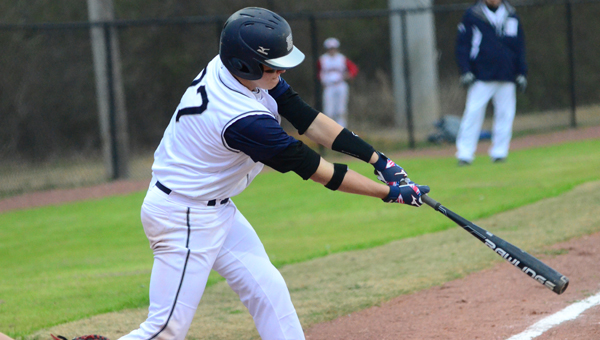 Evangel had 23 hits in two games against the Tuscaloosa Home Educators on April 28, winning both games easily and advancing to 20-13 on the year. (File)

TUSCALOOSA – Since April 16, the Evangel Christian School baseball Lightning have won seven of their last eight games, and have won those seven games by an average score of 9-1. That average margin of victory rose after the Lightning traveled to Tuscaloosa to take on the Tuscaloosa Home Educators on April 28, winning both games of the doubleheader easily by scores of 12-1 and 21-2 to move to 20-13 on the season.

Evangel scored eight runs over the first three innings of its first game with Tuscaloosa to take an early 8-1 lead, and the game was never really in doubt from the second inning on. The Lightning eventually added four more runs in the final two innings, brining the score to 12-1. Jacob Albright started the day from the mound for the Lightning, throwing 75 pitches over the course of four innings, giving up four hits and one run while striking out seven before Weston Akin came in to pitch the final two innings.

Evangel had 12 hits in the game, three of which came from Cameron Kimbrel. Kimbrel went 3-for-4 in the game with a double and knocked in three runs as well. Hahn Hahn Lau went 2-for-4 with a triple and an RBI, while Austin Simmons had two hits and two RBIs as well in the winning effort.

While the first game of the doubleheader wasn’t close from the second inning on, it didn’t even take that long in the second game for the Lightning to open up a sizeable lead. Six first-inning runs gave Evangel an early lead, and seven more runs in the top of the second gave the Lightning an early 13-0 lead, which they eventually turned into a 21-run, four-inning win.

Josh Lau started the contest for Evangel and threw just 35 pitches over 2.1 innings, giving up one hit and two earned runs in the game before Seth Harrison came in to finish the remaining 1.2 innings. From the plate, Akin led the way with a 4-for-5 line that included three RBIs and a double. Hahn Hahn Lau went 2-for-3 with another triple and knocked in four runs in the second game, giving him five over the course of the doubleheader.

Lauren Mayer and the Thompson Lady Warriors finished the 2016 season with a 3-0 win over Huntsville on April 27.... read more