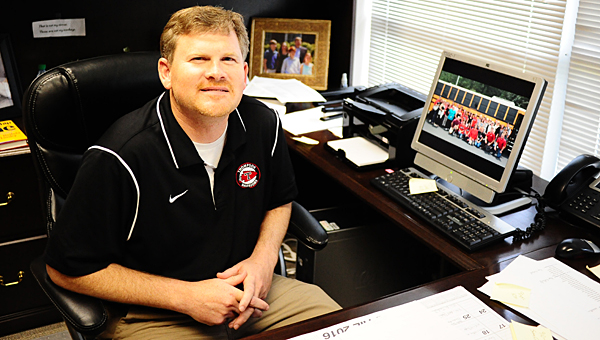 ALABASTER – Hanging above Thompson Sixth Grade Center Principal Dr. Daniel Steele’s office door is a sign reminding him why he does what he does each day.

“We are all just trying to make a difference in kids’ lives,” Steele said as he pointed to a sign reading “I am the difference” hanging above his door. “We are intense about raising tests scores, but we are also intense about meeting the needs of our kids.”

Steele’s efforts have not gone unnoticed.

“Dr. Steele is credited with creating a school culture that is focused on student achievement and committed to personal connections to all students,” read an AASSP release, noting Steele has raised TSGC students’ reading proficiency by 60 percent and math proficiency by 68 percent. “Principal Steele led the faculty to build a more collaborative culture in the building. Using “eleot”, an AdvancED classroom observation instrument, the teachers are able to observe their colleagues, and give a report to the observed teacher.”

During an April 29 interview, Steele was quick to divert the spotlight from himself.

“The entire school is part of this award. I work with an excellent team here,” Steele said. “I don’t teach a single kid here. These people meet the needs of kids every day.

“(Alabaster School Superintendent) Dr. (Wayne) Vickers is who sets the vision for this system. He has given me the support and the resources I need to be successful.”

Steele has been working in the education field for the past 23 years, and has been a school administrator for 15 of those years. He has been the TSGC principal since 2014, and previously served as assistant principal and principal at Thompson High School.

“Congratulations to Daniel Steele on his selection as Alabama’s Principal of the Year,” AASSP Executive Director Dr. L. Earl Franks wrote in a statement. “His accomplishments as a principal are significant and worthy of accolades and recognition at the highest level. Steele’s effective leadership in transforming Thompson Sixth Grade Center to meet students’ needs reflect his abilities that are worthy of state and national recognition.”