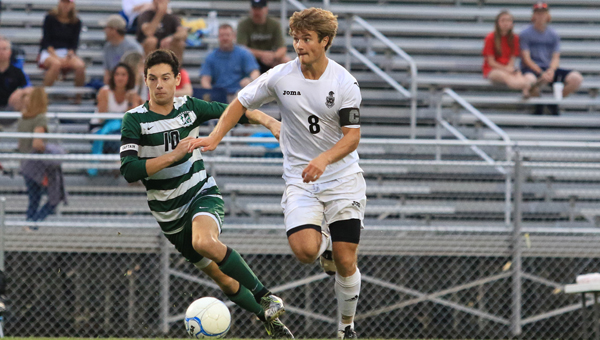 Briarwood’s Josh Brower looks downfield against John Carroll Catholic on April 30 during the Lions’ opening round playoff win over the Cavaliers. (For the Reporter / Dawn Harrison)

NORTH SHELBY – The Briarwood soccer Lions scored two goals in the first half of their first-round playoff match with John Carroll Catholic before adding another in the second half en route to a 3-2 win. Freshman Logan Frost scored once in each half while senior captain Josh Brower also scored in the first half for the Lions, as they held off a late charge from the Cavaliers to get the win and keep their season alive.

Briarwood will now host area rival Pelham on May 3 in the second round of the 6A playoffs. The Lions and the Panthers split their regular season series, as Pelham won the first meeting 3-2 before Briarwood took the second meeting, and the regular season area title crown, via a 2-1 decision on April 29.

Maria Mendoza and the Chelsea Lady Hornets beat Homewood on April 30 in the opening round of the 6A state... read more