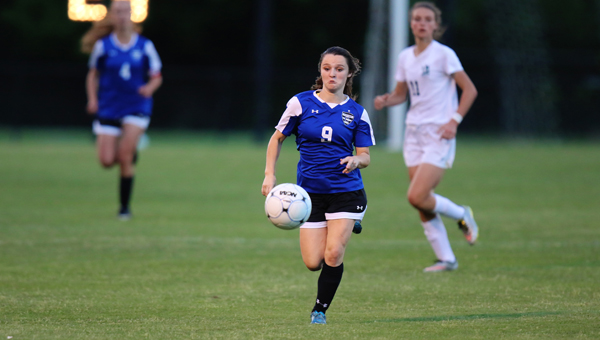 Kennedy Davis broke a 73-minute scoreless stalemate with a goal off a throw-in against Spain Park in the opening round of the 7A playoffs on Tuesday night. The goal turned out to be the difference maker, as the Eagles held off a phenomenal Spain Park performance to advance with the 1-0 win. Spain Park finished the season with a 13-10-2 record while Oak Mountain moved to 25-0-2. The Eagles will now play Vestavia Hills on May 7 for a chance to return to the 7A Final Four and defend their state title from a season ago.

After getting beat by John Carroll Catholic 6-1 on April 7, the Chelsea Lady Hornets found themselves headed to Birmingham on May 3 for a second round 6A playoff matchup in hopes of seeking restitution for the earlier loss. Chelsea was down 2-0 in the waning minutes of the first half, but got a goal back on the Lady Cavaliers and went into the half down 2-1. After John Carroll scored another goal early in the second half, the Lady Hornets responded with back-to-back goal in the next 20 minutes. Regulation ended at the 3-3 stalemate, and after two scoreless overtime periods the game went into penalty kicks. Neither team could gain an upper hand over the first five kickers, but eventually John Carroll Catholic won on penalty kicks by a 3-3 (7-6) final. Chelsea ended the 2016 season with a 13-8-0 record.

Rakim Ali, Austin Pack, Parker Bryant and Graham Holder each scored a goal in Indian Springs’ opening round playoff game against Holy Spirit Catholic, winning 4-0 and advancing to the second round of the 1A-3A playoffs. Springs moved to 21-2-3 with the win and will play county rival the Westminster School at Oak Mountain on May 7 for a chance at the 1A-3A Final Four.

After starting the season rocky at 0-4-1, the Knights from the Westminster School at Oak Mountain have won 11 of their last 14 games, including most recently a 5-1 win over Prattville Christian in the opening round of the 1A-3A playoffs on Tuesday. The Knights moved to 11-7-1 with the win, and will now play in-county rival Indian Springs on May 7 for a chance to return to the 1A-3A Final Four and defend last years’ state title.

Helena beat Carver-Birmingham 10-0 in the second round of the 4A-5A playoffs on Tuesday, advancing easily on to the third round. The Huskies will now take on 4A-5A No. 6 Demopolis on Saturday for a chance to return to the 4A-5A Final Four for the second season in a row.

After falling behind 1-0 early to area rival Calera in the second round of the 4A-5A playoffs on Tuesday, Helena stormed back late in the first half to take a 2-1 lead at the break thanks to goals from Juli Tatum and Roby Boatman. Calera tied the game early in the second half, but two penalty kick goals from Tatum later in the half gave her a hat trick and gave the Lady Huskies the win. Helena will now advance to play Marbury at home on Saturday for a chance at the 4A-5A Final Four.

The girls from Indian Springs beat the Lady Knights of the Westminster School of Oak Mountain on Tuesday in the opening round of the 1A-3A playoffs, moving the No. 1 1A-3A Indian Springs team to 18-3-1 on the year. Springs will now turn its attention to undefeated Holy Spirit Catholic, and will travel to play the Lady Titans on May 7 for a chance to move to the 1A-3A Final Four.