The Arc benefits from auction event 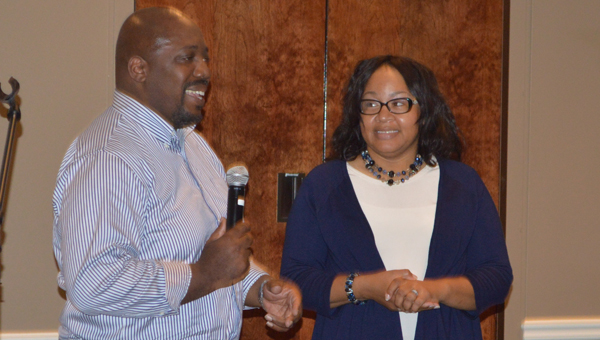 Dion and Kimberly Brinson share their experiences with The Arc of Shelby County at the Uncorked and Uncapped fundraising event May 3. (Reporter photo/Jessa Pease)

PELHAM—Individuals with developmental disabilities and their families have been utilizing the programs and services of The Arc of Shelby County since 1974, when the organization first formed.

At The Arc’s recent Uncorked and Uncapped Auction fundraiser, two individuals, who have experienced first-hand the quality of the programs, shared their story with attendees.

Kimberly and Dion Brinson moved to Shelby County from Buffalo, N.Y., with their daughter, Erin. While in Buffalo, Erin was in a program where she was progressing, and the Brinsons said they wanted to be sure she didn’t lose her progress when they moved.

“She likes to be active, she wants to work,” Dion Brinson said. “She understands that working is important, and so when we came here we didn’t know exactly what to do.”

Then Kimberly found The Arc of Shelby County online as was guided through the process by The Arc’s Erika Gilliard. Kimberly said Gilliard was always there to provide phone numbers and advice, and she seemed genuinely interested in the family’s needs.

“I love The Arc, because the people they have working for them actually make a difference,” Kimberly said. “The Arc is a stepping stone for Erin. That’s what I believe. Erin came in and then Erin transitioned and she got a job. That was all due to The Arc.”

The Brinsons’ story is similar to other families who have benefitted from The Arc’s programs, and Director of Development Tery Young said the need in Shelby County is growing.

To support and enhance its programs and services, The Arc of Shelby County hosted the Uncorked and Uncapped Auction May 3 at the Pelham Civic Complex. The event featured complimentary beer and wine tastings, live musical entertainment, snacks and a silent auction.

A live auction, led by Shelby County resident Ken Jackson, wrapped up the night’s festivities. Guests bid on several items, such as golf packages, a stay at Ross Bridge and a one-year family membership to the McWane Science Center.

Several cash donations were also made to The Arc, and all the money went to benefit the non-profit organization’s programs.