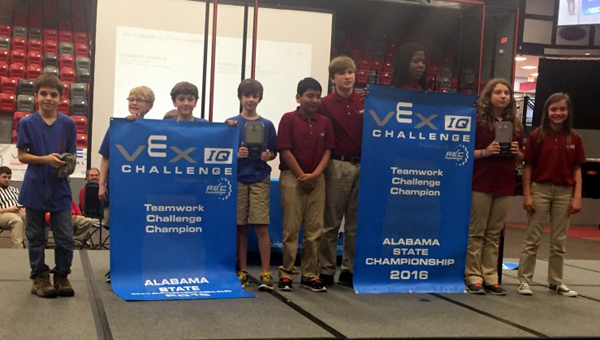 The OMMS robotics team took top honors at the Alabama TSA State Conference IQ tournament and will travel to nationals in June. Pictured are members of the OMMS team at a tournament earlier this year. (Contributed)

NORTH SHELBY—Teams across the county are in the midst of postseason play, and the Oak Mountain Middle School robotics team is no exception. The school’s eighth grade team took home top honors at the state-level competition on April 27.

Teams from across the state traveled to the Birmingham Jefferson Convention Complex to compete in the Alabama TSA State Conference IQ tournament.

The tournament put students’ preparation, programming, problem solving and teamwork skills to the test. The competition was broken down in to several parts.

The OMMS eighth grade team took home the Excellence Award, the tournament’s top honor given to the team with the best robot, programming skills and engineering notebook.

The OMMS team’s performance was the result of diligent work throughout the year, OMMS robotics coach Sherri Whitehead said.

“They come in before school…some students will come in and work (during school),” Whitehead said.

“To me one of the biggest takeaways is, students have to learn to communicate and form a game plan very quickly,” Whitehead said. “Teamwork is such a critical skill in jobs. You have to work together.”

The OMMS eighth grade will compete in the TSA Vex National Championship in Nashville, Tenn., from June 28-July 2.

Fun and life-size foosball coming to OMMS for Spring Fling