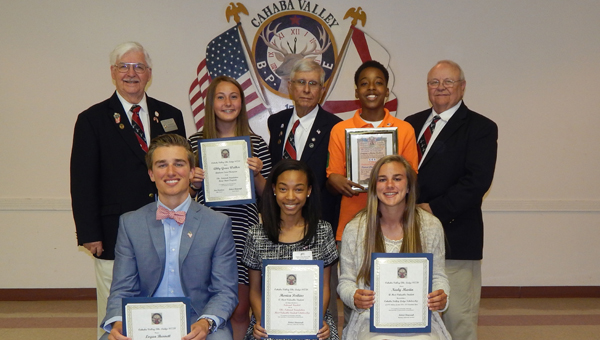 PELHAM— To honor students who participated in and won special honors in the Elks’ programs for youth, the Cahaba Valley Elks held an awards dinner at their lodge May 2.

“(My favorite part is) being able to honor these young people,” Shinpaugh said. “I’ll tell you, they are amazing, and they are our future. Anything we can do for them.”

The Elks members and their spouses brought dishes for a potluck dinner, and Shinpaugh said they included a social hour to allow the Elks to mingle with the youth before presenting awards.

Monica Perkins, of Hoover High School, was awarded a Most Valuable Student Scholarship, which is open to any high school senior who is an American citizen.

The Elks’ Hoop Shoot program is a free throw shooting competition open to boys and girls ages 8 to 13. Boys and girls compete in separate categories, and ages groups are divided into ages 8 and 9, 10 and 11 and 12-13.

The Elks’ Americanism Essay Contest is open to students in grades five through eight. All students write about the same topic. The first place winner in the contest was Alabaster student Chaney Johnson.

Shinpaugh said the lodge also sponsored a national winner in the essay contest, but the name of the winner will not be announced until the school’s awards day.

“They worked so hard to accomplish these feats,” Shinpaugh said of the students. “As far as the Hoop Shoot is concerned, it takes hours and hours of practice. The Americanism Essay—it’s amazing the ideas they come up with. They come up with some great essays.”