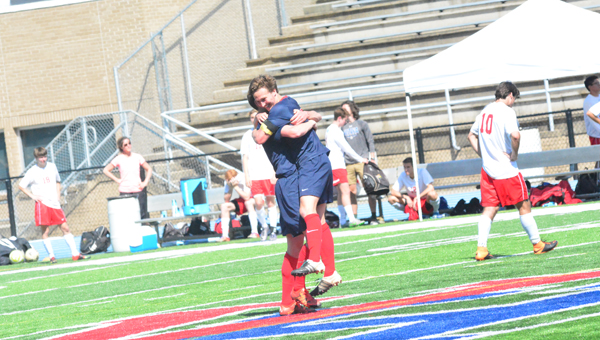 Oak Mountain’s Landon White embraces teammate Christian Thomason at midfield on May 7 after the Eagles knocked off Vestavia Hills 1-0, punching their ticket to the Final Four for the sixth year in a row. (Reporter Photo / Baker Ellis)

VESTAVIA HILLS – After beating Spain Park in the opening round of the 7A state soccer playoffs via a 1-0 decision on May 3, the top-ranked and undefeated Oak Mountain Eagles traveled to play Vestavia Hills in the second round of the postseason on May 7, with a Final Four berth on the line. The Eagles had played and beaten Vestavia twice previously this season, beating the Rebels 1-0 in the opening game of the season before beating them again on March 14 via a 3-1 decision. In this third meeting of the year between the two, Oak Mountain posted its 12th shutout in its last 14 games, beating Vestavia 1-0 in the third meeting of the year, keeping its perfect season and hopes of repeating as 7A state champs alive.

“We knew what formation they were probably going to go with,” Oak Mountain head coach Daniel DeMasters after the game. “They have a very good player in Patrick Morton, and we had to be aware of him. Defensively that was the game plan, to keep him contained. But our back line has been stellar all year, and I thought that they’d be able to have that task. But we also had a strategy to move Hunter (Holstad) up top, which moved Morton to the back line and helped us.”

Hunter Holstad, one of Oak Mountain’s three senior captains, has spent a large portion of his Oak Mountain career on the back line or in the midfield, but has played roughly half of this season, by his own estimation, up front in the attack. He is an incredibly skilled, heady player who demands attention from every opposing team, and his place in the Eagle attack forced Vestavia to move their own stud, Morton, into the back to keep tabs on Holstad.

“Me and Kennedy (Davis) and coach talked yesterday about putting me up top and putting (Davis) up top with me, or at attacking mid, that way we could get on them fast,” Holstad said of his spot in the attack in this game. “I thought Patty (Morton) would follow me, and he did, which brought him out of the middle and helped us a lot.”

In the second half the game opened up somewhat. A quick chance from junior forward Kennedy Davis in the 47th minute and another look from junior Victor Perez in the 48th minute were both denied, but were a sign of things to come in the more aggressive second half. In the 53rd minute, the Oak Mountain defense cleared a dangerous, deep throw-in out to Davis, who used his trademark speed to leave a Rebel defender in the dust and made a run on goal in the counterattack. Holstad was running parallel to Davis on the other side of the field, and Davis laid a ball in space for Holstad across the face of the Rebels’ goal, but the ball was about two inches too far ahead for Holstad to finish the chance, and the opportunity died.

Just six minutes later, however, Oak Mountain broke through. Sophomore Jackson Murphy played a ball from the touchline back across the face of the Vestavia goal, where Davis was waiting in front of a wide-open net. He finished the chance with ease, giving the Eagles a 1-0 lead in the 59th minute of the game.

“I saw Jackson was on the goal line, and I looked for the cross,” Davis said of the play. “The keeper was drawn out of his box a little bit, I just got in position for the cross and was able to tap it in.”

Over the final 20 minutes Vestavia had a few chances at goal, but the Oak Mountain defensive unit of goalkeeper Ryan Dearman and defenders Landon White, Brandon Kelley and Chandler and Christian Thomason, easily one of if not the best units in the state, held, giving the Eagles the tight win.

“Those guys have been playing together for a year and a half now, and four of those guys played club together,” DeMasters said of that unit. “Obviously there are times when they break down, but it’s just a blessing to have them there.”

Oak Mountain stayed undefeated with the win, moving to 26-0-2 on the year. The Eagles will play Huntsville High School in the 7A Final Four on May 13 at 3 p.m. in Huntsville, with a berth for the 7A state championship game on the line.