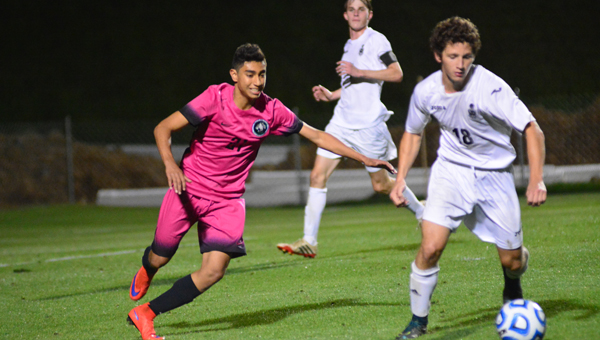 After beating Briarwood 1-0 on May 3 and Southside-Gadsden 2-1 on May 7, the Pelham Panthers are returning to the 6A Final Four for the second year in a row. (Reporter Photo / Baker Ellis)

PELHAM – For the second time in as many seasons, the Pelham soccer Panthers are headed to Huntsville. After beating area rival Briarwood in a tightly-contested game in the second round of the 6A playoffs on May 3 by a 1-0 final, Pelham, the No. 7-ranked team in the class, hosted Southside-Gadsden in the third round of the playoffs on May 7 with a semifinal berth on the line. After taking an early 1-0 lead, Pelham and Southside-Gadsden went into the half tied at 1-1 before the Panthers scored late in the second half to win 2-1 and return to the 6A Final Four.

Pelham started the year 3-4-0, suffering a 7-0 loss to Spain Park and a 6-1 loss to Hoover early in the season. The Panthers are a young team, with only three seniors on their 20-man roster, and it took some time for this team to gel. While Pelham is young, it is also an incredibly skilled team, with a host of incredibly intelligent, savvy ball handlers who rarely make mistakes with the ball at their feet, and began to trend in the right direction as the season progressed. After finishing the regular season with a 13-9-2 record, the Panthers had to beat Homewood in the first round, a team that had beaten Pelham 8-1 in the regular season, to even begin to think about a playoff run.

After the Panthers downed the Patriots 2-0 in the first round, Pelham had to travel to play area rival Briarwood, a team the Panthers had beaten once and lost to once in the regular season. A late goal from freshman Oliver Espinoza was the difference in that game, as Pelham beat the Lions, advancing to the 6A quarterfinals.

Southside-Gadsden had beaten a tough Gardendale team on the road in the second round in penalty kicks, 1-1 (3-2) to move into the quarters, and played Pelham tight early. Junior Armando Valencia found Adrian Arceo in the eighth minute of the contest to give Pelham an early 1-0 lead, but Southside-Gadsden’s Carter West found the back of the net in the 36th minute to tie the game at 1-1, which held until halftime.

The second half Pelham began to dominate possession, as the Panthers are prone to do with their plethora of skilled attackers. While Pelham dominated the possession, the scoreboard did not change for most of the second half as Tyler Huffstutler, Southside-Gadsden’s keeper, came up big time and again with big saves. Finally, in the 65th minute, freshman Irvin Rodriguez received a long ball from the back line and shoved a shot into the left-side netting past Huffstutler, giving the Panthers a 2-1 lead, which held through the rest of the contest.

Pelham advanced to 16-9-2 with the win and will travel to Huntsville on Friday, May 13 to take on 6A No. 1 overall seed Cullman for a shot at the 6A state title game.

Jack Wilson from the Westminster School at Oak Mountain battles Sean Park of Indian Springs for a ball in the... read more