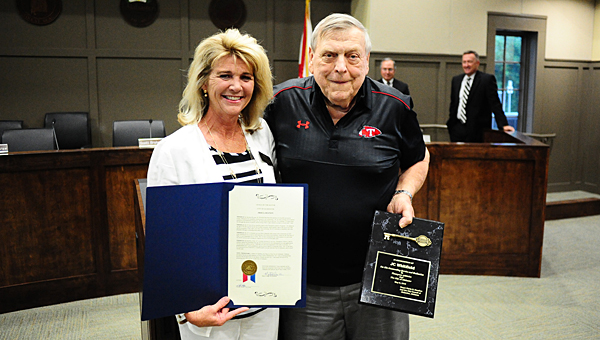 ALABASTER –J.C. Whitfield was all smiles as he stood at the front of the Alabaster City Hall council chambers, ready to receive handshakes, hugs and kind words from many of the people he has impacted over the past five decades.

“It’s just great. It feels great,” the soft-spoken fixture in the community said when asked about the crowd of supporters waiting to congratulate him.

For the past 48 years, Whitfield has been working the ticket booths at Thompson High School athletic events, becoming a familiar face to generations of Alabaster residents.

On May 9, the community gave thanks to Whitfield’s decades of service, as Alabaster Mayor Marty Handlon presented Whitfield with a key to the city and a proclamation in his honor.

“For the last 48 years, J.C. Whitfield has been the epitome of a humble servant in Christ, reflected in his steadfast commitment to our community,” read the proclamation. “Mr. J.C. does nothing out of selfish ambition, or for personal recognition.

“Mr. J.C.’s volunteer services have impacted other areas in the community as well, from working at City events to participating in the church food ministry, where he fed ‘the least of these’ in our community for 13 years,” it read.

Dozens of Whitfield’s friends and family members filled the council chambers to celebrate the honor.

“J.C., thank you. You’ve been an incredible asset to this city, not because of what you do, but also because of who you are,” said Ward 2 Councilman Bob Hicks. “Thank you. I appreciate you from the bottom of my heart.”

“I’ve had the pleasure of knowing you pretty much since I moved here in ’78. You’ve been a fixture at every game,” Brakefield said. “When I think of Alabaster, I think of guys like you, guys who are constantly giving back. It’s hard to put into words what you mean to this community, but we sure do appreciate you.”