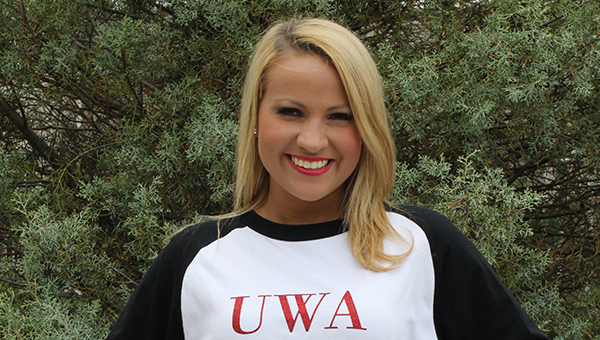 : Helena senior Lille Brewer will attend The University of West Alabama in the fall and was recently selected as one of the newest members of the UWA Tigerettes squad. (Contributed)

HELENA–Helena High School senior and current HHS majorette Lillie Brewer recently found out she’d be one of the newest members of The University of West Alabama Tigerettes team.

Brewer tried out for the team on Saturday, April 30 and found out later that day she was one of seven new members to take the field in the fall.

Brewer has been twirling baton since she was 2 years old and made the UWA team after performing an individual routine.

“I was so excited and words can’t even describe it,” said Brewer. “I’ve been working for this my whole life.”

Brewer said she chose West Alabama over other schools because she loved the band program and the small-school feel of UWA and how personal it felt.

Brewer has spent the past two years on the Helena Majorette team and said her favorite part is being out on the field performing.

“I love to perform and to show off my talents and it just makes me feel glamorous,” said Brewer. “I like to entertain people at halftime.”

Brewer said she felt like her time spent at Helena helped prepare her for making the team at UWA, where she will report the last week in July for band camp.

“Being at Helena made me a stronger twirler and a stronger person and I feel like I can get through anything,” said Brewer. “It taught me more about band and helped me accomplish my goal.”

West Alabama will kickoff the 2016 football season on the road against North Greenville on Thursday, Sept. 1.