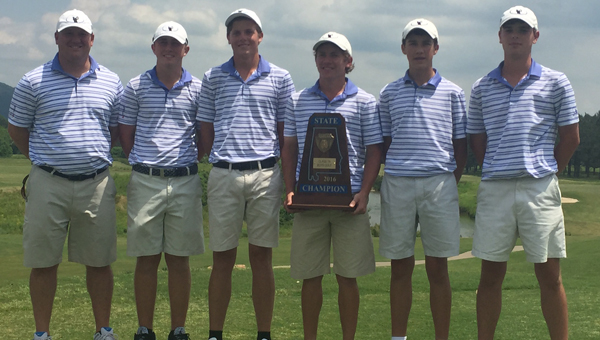 The Spain Park boys golf team won the 7A golf state title on May 10, beating Fairhope by 14 strokes. (Contributed)

HUNTSVILLE – From 2008-2014, the Spain Park boys golf team won six out of seven 6A titles, winning every year during that span except for 2011. Head golf coach Brian Carter came to Spain Park in 2012, and immediately ripped off three straight 6A titles, cementing Spain Park as the top golf program amongst the state’s largest schools.

Last year, however, after so much consistent success, the Jaguars didn’t even make it out of their section, 7A Section 3. The top two teams from each section advance on to the sub state round of the golf state tournament, and a season ago both Mountain Brook and Vestavia shot better than the Jaguars at the section meet. After the let-down a season ago, Carter said his team had no trouble finding motivation to put in time on the course last summer.

“Coming off a tough year last year, a lot of guys, including myself, felt like we had something to prove, because we felt like we had a let-down year based on previous years,” Carter said. “The guys really took that to heart, they practiced a ton over the summer, and came in to the season ready to go.”

That being said, the 2016 version of Spain Park’s team still didn’t peak until late in the season, and entered the section tournament this year without a win under their belt.

“We didn’t peak until late, the guys put it together all at the same time,” Carter said.

After winning the section tournament and placing second in the sub state round, Spain Park headed back to the state championship tournament, its first as a 7A school, which was held this year at the Robert Trent Jones Hampton Cove course in Huntsville.

Spain Park’s top five players consisted of seniors Thomas Luther and Miller Conley, juniors Nick Robillard and Landon Carner and sophomore Reed Hereford. Luther, Conley and Carner all shot under par for the tournament, while no other team more than one player shoot under par. After the first day of the two-day event, Spain Park had opening up a 12-stroke lead on second-place Fairhope, as Luther, Conley and Carner were the three lowest-shooters of the round. The second round itself was closer, as Fairhope shaved nine strokes off its overall second round compared to its first, but the damage had already been done, and Spain Park won its first 7A state tournament with an overall score of 571, beating Fairhope by 14 strokes.

The state title gives the boys’ golf team its seventh championship in the last nine seasons, and while the Jaguars will lose Luther and Conley, who both shot under-par for the tournament, Carter feels there are younger guys ready to step up to the plate.

“We have a few guys that I feel like are right there, ready to break through and be plugged in to those few spots,” Carter said.

While Spain Park won the 7A tournament by 14 strokes, it was still the second-closest tournament win of any classification.