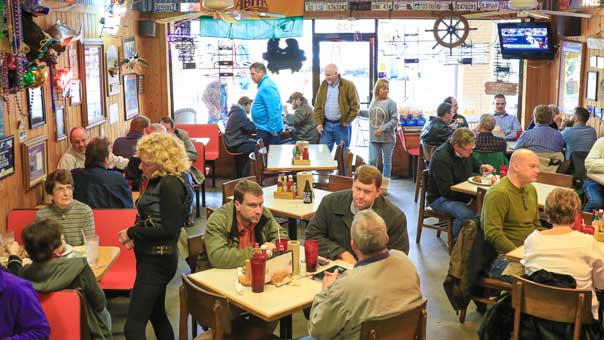 The restaurant has a neighborhood feel and several regulars.

It all started with a card game.

About 20 years ago, Robert Regard and a group of friends were playing cards together when a crazy bet was made. “It was sort of a card game gone bad,” Robert laughs.

The group was all from Louisiana, and they were discussing how there was nowhere to find Cajun food in Birmingham. And so a bet was made that if Robert lost, he would have to put up the money for a Cajun restaurant and another of the guys would run it.

As fate would have it, Robert lost the hand, and soon after, Crazy Cajuns’ Boiling Pot was opened. When the other guy moved out of town four months later, Robert, formerly in the roofing business, stepped in and hasn’t looked back.

Growing up, Robert’s grandmother had taught him how to make such classic Cajun dishes such as gumbo, etouffee and jambalaya, and so he brought these to the menu. And the community warmly welcomed the new eatery.

“They loved it,” Robert says. “There was nowhere to eat authentic Cajun food here in Birmingham. And they fell in love with the food, plus it’s a fun place to come. We’ve got outdoor seating, which a lot of people like to sit outdoors here in Birmingham. It’s a neighborhood restaurant. When you walk in, many times, people know each other. It’s like a modern-day ‘Cheers’ restaurant.”

He and his wife, Lulu, enjoy how much the customers have embraced Crazy Cajuns’. In fact, many of the items that hang on the walls were brought in by their customers. From deer heads and stuffed animals to Mardi Gras beads, people have decorated the neighborhood spot with their own items from home.

“I think they wanted to claim their tables,” Robert says. “They would pick their favorite tables and put something above it.”

The authentic Cajun menu includes popular dishes like crawfish, which is one of their main sellers spring through summer; seafood rotini (sautéed seafood in a fettuccini sauce); shrimp and grits; gumbo; etouffee; jambalaya; red beans and rice; grilled fish and salads. There’s also Lulu’s Platter, which is seafood rotini topped with a piece of blackened fish of your choice and also fried soft-shell crab.

Crazy Cajuns’ Boiling Pot is open for lunch and dinner, Monday through Thursday 11 a.m. to 9 p.m. and Friday through Saturday 11 a.m. to 10 p.m. They also cater to both businesses and homes, allowing their customers to custom-build their catering menu. Whether it’s a crawfish boil or gumbo, they are happy to help.

Crazy Cajuns’ sometimes has music on the patio when the weather is nice, usually on Thursday evenings from 5 to 7 p.m. And they feel they have the best customers.

“That’s who makes Crazy Cajuns’ is our customer base,” Lulu says. “It is the neighborhood place. They are friends with each other. They sit around the patio, and there will be five tables conversing with each other.”

Why I Love Shelby County

“The community and people of Shelby County have always been so welcoming.” Photograph Contributed  Deidre Downs Gunn traded in her... read more