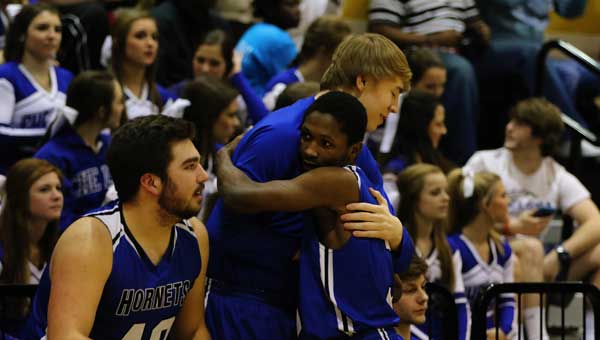 Stephen and Aaron Washington share a moment on the sideline of a Chelsea basketball game.

On April 6, 2014, Stephen Lanzi tried to block a shot that changed his life.

He was playing in an AAU game at Thompson High School and was just trying to make a play on defense. The tall, slender sophomore rose off the court to challenge a shot, but caught a palm across the right side of his face and fell to the ground.

A month later, at the age of 16, he was legally blind. Before we get into that, however, let’s back up a minute.

The Lanzi household is, in a word, busy. Robin and Mark are the proud and wonderfully accommodating parents of five boys, ranging in age from 8 to 18. Stephen is the oldest and a senior at Chelsea High School.

His roommate, Joseph, is 16 and a junior at Chelsea. He is the point guard on the basketball team, and the two are very close. Matthew is 14, Paul 11 and Anthony, the baby, is 8. While that is the extent of the Lanzis biological brood, it is not uncommon for their house to have nearly double that number of boys at any given time in the form of a horde of “adopted” neighborhood kids.

“We adopt a few along the way,” Robin says, laughing. “It’s a good thing.”

Robin has her Ph.D. in developmental psychology and works at UAB, while Mark is in medical device sales. Their home is in a constant state of controlled to semi-controlled chaos, and it’s obvious that is exactly how the Lanzis like it.

In the sporting world, the Lanzi boys are a basketball bunch first and foremost. Other sports have held their attention for phases, but basketball is at the top of the pecking order.

After landing at Chelsea as an eighth-grader, Stephen got involved with the basketball program. As a 6-foot-3-inch sophomore, he averaged three points and three rebounds a game for the varsity more than 25 games and played roughly 12 minutes a contest, although his time on the floor gradually increased as the season went on.

He played 26 minutes in the area championship that year against Pelham, according to current Chelsea head coach Nicholas Baumbaugh, who was the JV coach at the time.

“He was the first guy off the bench as a sophomore,” Baumbaugh says. “He was probably 6 feet 3 inches at the time and gradually got more minutes as the season progressed.”

After a promising sophomore season in which he had shown flashes of the player he hoped to grow into, he joined a Center Point-based AAU team to continue to hone his skills. He continued to grow, and Baumbaugh was excited for the next few seasons of Hornets basketball with Stephen as one of the focal points of the offense.

“After that season, we were talking about how Stephen was going to fit in as a junior, what his role was going to be,” Baumbaugh adds.

While the Lanzis had an idea about what Stephen’s future had in store, God had a different plan.

That day on April 6, Stephen was actually chasing a triple-double, his dad says.

“We have it on tape, actually,” Mark says. “He had a triple-double going that game, with blocks, points and rebounds. Oddly enough, they qualified for Nationals that game. It was really a command performance.”

After Stephen went up to add to his burgeoning block total in the game and fell to the floor after getting hit, he came out of the game, just for a moment, before returning. It was not something that, in the moment, garnered much thought from Stephen. However, a week later, he knew something was wrong.

“Next week, we were at a tournament at Spain Park,” Stephen says. “Just, my right eye, I couldn’t see or read. Just out of my right eye.”

At this point, a week removed from catching the hit, he hadn’t said anything to anyone, including his parents. It was not until 11 days after the incident that he first spoke up to his mother.

“I’ll never forget, I was sitting right here,” Robin says, sitting at their kitchen table. “He walks over to me, after dinner, and says to me, ‘I feel like I’m going blind in my right eye.’”

Stephen, who had always had 20-20 vision, saw an eye doctor the next day. The benchmark for legal blindness is 20-200. Stephen’s vision in his right eye registered at 20-400.

What ensued was a month-long chase for a diagnosis. Trial and error became the name of the game, and during roughly the next four weeks, the Lanzis did not know what was going on with their eldest son.

LHON is a mitochondrial genetic condition, inherited from the mother, that can cause the optic nerve to atrophy, but does not always do so. It does not affect either the eye or the brain, but rather the optic nerve.

“It’s like having a TV and a cable box,” Robin described it. “The TV works and the cable system works, but the cord that connects them does not. His eye is fine, his brain is fine, but the optic nerve that connects the two does not transmit.”

LHON has never shown itself in Robin’s family before, so there was no way of knowing she was a carrier until undergoing genetic tests, which she did when Stephen’s eyesight in his left eye began to regress.

Boys cannot pass on the disease to their children, so while Robin inherited LHON from her mother, and her mother from hers, it will not be passed on to the next generation of Lanzis.

“The good Lord knew, in some respects, to give us boys,” Robin said.

Stephen has been no doubt asked time and again the same question: “What is it, exactly, that you can see?”To this he responds in the way he responds to every question. Calmly, measured, not in any way put out or annoyed with answering the same thing he has no doubt walked through countless times.

“It’s kind of hard to explain,” Stephen says. “The best way I think I can describe it is it’s like looking through a screen, like on a screen porch, and having some holes that are there and the others that are just blurred. (My) Peripheral (vision) is good, but inside that is blurry, and in the very middle there’s like one or two dots that are clear.”

The low point was this past January, Stephen says, when his vision was at its worst. Since then, it has recovered some, and the possibility remains his vision could still recover more.

To look at and meet Stephen, however, is to meet a seemingly normal teenager, albeit a very tall one. He does not walk with a cane or use a seeing eye dog or wear heavy, dark glasses. He can get around on his own, especially in familiar places.

He is also incredibly intelligent. Stephen recently got a 31 on his ACT, a score he achieved while having the questions read aloud to him. He wasn’t happy with that score though, so he recently retook it. Math and science are his strongest subjects, and he got a 33 on the math section of the test. Again, without being able to actually see any of the questions. He hears complicated calculus problems and can work them out in his head, which is objectively incredible. He has a 4.25 GPA and has been accepted to every college he has applied to, with scholarship offers from each as well.

His vision may not be sharp anymore, but his mind is the equivalent of a whetted steak knife.

Stephen isn’t sure what his future holds right now. He’s not sure where he’s going to school or what the next years of his life will look like. But at 18, who is? What is a sure thing, what is certain, is that Stephen Lanzi is going to have a fulfilling life, as long as he is on this planet.

Worship leader Kevin Derryberry has taken the praise team out into the community and prisons to minister. Westwood Praise Team... read more