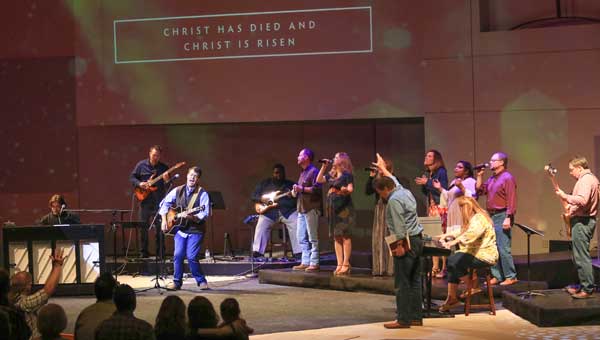 Worship leader Kevin Derryberry has taken the praise team out into the community and prisons to minister.

Westwood Baptist Church’s praise team gets the church out. They get the church out of a building, out of thinking there is only one way to worship.

“As worship leaders, we are there to lead people to a place where they feel they can just be prayerful and worshipful before the Lord, without being inhibited by anything,” says Laura Hammac, praise team vocalist.

For some, that might mean hands raised to the sky, and for others, it might mean a head bowed low. It is all about what God is doing in each individual’s soul, Hammac says.

“I’ve been that person weeping in church, and I think that’s because God is obviously working on something inside of you,” she says.

Members of the Westwood Praise Team share this view on worship.

They share it because they have seen first-hand how people who have lost everything in life worship when given the chance.

“I told the praise team, ‘Y’all got to come. You’ve got to see these people worship with all their heart because that’s all they got,’” says worship leader Kevin Derryberry on why he began inviting members of the praise team out to minister in the community.

“I wanted them to see what worship really looked like,” he adds.

At least quarterly, praise team members gather others from the congregation and make their way to programs such as Life Tech Transition Center in Thomasville, The Lovelady Center in Birmingham and SafetyNet, south of Montgomery.

These organizations provide safe places for men transitioning out of the prison system, homeless women and women with addictions seeking new starts and youth struggling with behavioral issues.

Derryberry described the scene the first time he stepped into a prison setting to minister. It wasn’t exactly welcoming. Many of the men were “tattooed up to their eyeballs. They looked scary,” Derryberry says.

“When I first came to the program, they sat with their fingers in their ears and their eyes to the ground,” he says. “By the end, they were all looking up; they were all listening.”

Through these ministry events, Derryberry and his family had fallen in love with ministering to people who have been “down on life.”

The initial goal is to simply love these individuals and tell them about God’s plan for them, he says. He wanted church members at Westwood to experience the same sense of really impacting someone’s life.

“These people are crying out to God,” Derryberry says. “And it’s been amazing to see how God moves.”

Derryberry has taken as many as 60 people from the church to help in the prison. They also are invited regularly to lead worship concerts at other churches and be a part of other ministry events.

Todd Crews came to Westwood about eight years ago. He quickly became a part of the tech crew and the road crew ministering outside the church. He helps tote equipment, run sound and pray with people during the prison ministry events.

“Every time we go to these places, there’s a huge number of people who come to Christ,” Crews says. “It’s so rewarding to see what goes on.”

Crews gains the most, he says, from simply stopping for lunch with Derryberry on their way to and from ministry events. Unfamiliar faces approach Derryberry almost every time to express appreciation for his ministry work. One man they met had chosen to follow Christ during an event years ago and was now a youth minister at his own church.

“It has nothing to do with me,” Crews says, “but being a small part of that, getting to witness the change this work can do in people’s lives; it makes all of the time given so worthwhile. Out in the real world, you get to see the real results in people’s lives.”

Impacts of this ministry work become evident back in the sanctuary at Westwood, too.

“We are able to go into these places and come back with this fire,” Derryberry says. “You’d expect after the band going out to these events, they’d come back exhausted, but they don’t. They actually seem reenergized. It’s really amazing what God is doing.”

Derryberry says it is certainly contemporary, with perhaps even a bit of a rock edge. An ensemble of about two dozen members collaborate in creating this dynamic service.

The passion is there, according to Derryberry, because praise team members recognize their talents as gifts.

Crews say they use a majority of the walls for projecting images — stained glass or a cross on a hill. Others, meanwhile, work with Derryberry to finesse the song arrangements to suit the message.

Derryberry and Crews say all the use of these instruments, imagery and voices aren’t meant to put on a show. Worship leaders know, though, that they can only grasp for people’s hearts for a short time each week, he says.

“We’re competing against a lot — video games, concerts and social media,” Crews says. “We’re trying to reach the unchurched: to catch their attention and draw them in so we can get the message through.”

“If you’ve connected with them through the music, then you can get your message across. It’s an emotional thing,” he says. “When you combine music with a positive message from the Bible, it changes people.”

It reaches Arlyn Marheine and his family.

Marheine became a member at Westwood 13 years ago and attends still with his family. He said his 7- and 10-year-olds are often captured by the images displayed across the wall. It’s more than entertainment for the kids, though. Marheine says his daughter will see the cross and mention later how she noticed the image related to the song or another part of the service.

There is an authenticity too from those leading the worship, Marheine adds.

“There is an emotion and a feeling that I pick up on,” Marheine says. “The person singing and the musicians playing really seem to connect with the music. I hear a passion that resonates with me.”