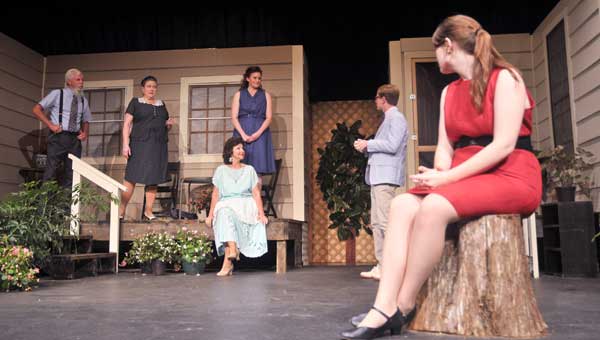 The group has several upcoming shows this year including “The Hound of Baskervilles,” “A Radio Variety Show” and “1984”.

Steve Gilbert never really meant to end up on stage, but it happened anyway.

He did it willingly. I mean — who can resist the opportunity to slam doors, bang pieces of metal together and hit wooden blocks against each other?

“It was an original show called ‘The Tubes Glow in the Dark,’ a stage adaptation of some old radio shows,” he says. “Montevallo Main Street Players performed the drama on stage with live sound effects, and I created those live on stage for the radio drama. I got to do things like use a pair of shoes to create walking sounds, ring an old telephone and create a lot of noises.”

For the most part, that’s where his stage experience begins and ends, he said. “Otherwise, I like staying behind the curtain.”

But he loves his involvement with Montevallo Main Street Players so much that he can’t seem to stop being a part — he hasn’t been able to ever since he was first recruited to help with technical needs about a decade ago.

“I had a friend who was on the board of directors who came to me and said they needed someone with technical experience,” Gilbert recalls.

The next thing he knew, he was the board’s vice president and then president.

It’s such a fun part of the community that it kind of tends to rope you in, Gilbert says.

“I think it exposes the community to a lot of different aspects of theater and offers a lot of ways to get involved,” he says.

If you’re an actor, great — but if not, there’s props, sound, set building and a whole host of other things, he adds.

“We are a very hands-on organization,” Gilbert says. “We try to get members of the community involved and have open auditions for all of our shows.”

Montevallo Main Street Players, which was founded in 1971, is the oldest operating community theater in Shelby County and has had community at its core since day one.

The group has done plays in homes, on the campus of the University of Montevallo, in the old depot and at the Strand Theatre on Montevallo’s Main Street.

“It’s a fantastic organization,” says Elaine Hughes, one of two surviving founding members of the group.

It started as a way to unify the community during the time when integration was happening, she explains. The group came together to do a play involving leaders in different parts of the community, and it was not only successful, but it was “so much fun that we decided to keep doing it.”

And the county’s first community theater group was born.

“It was galvanizing for the creative community and the community in general,” Hughes says. “It brought everyone together. Everyone enjoyed it.”

They did more and more shows — and haven’t stopped. They have traditionally done three shows a year, and this year is no exception.

An adaptation of George Orwell’s “1984” currently is set for October, and another radio show is in the works for the summer production.

“We try to have a blend of classic plays, as well as a blend of musicals and comedies,” Gilbert says. “And we try to pick shows with a cast of different age groups and include people who have never been on stage before but maybe have that on their bucket lists.”

They want to help members of the community get ready for the stage if that’s something they’re interested in doing, he says.

“And for the community, from the entertainment standpoint, it offers the opportunity to go see your friends and neighbors on stage and be exposed to a lot of different aspects of theatre,” he says. “It offers a great entertainment venue for Montevallo.”

Stepp Up in Faith