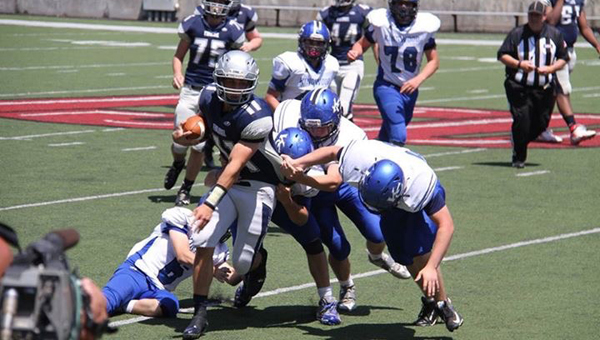 Evangel Christian’s Micah Murphy makes his way up field with Kingwood Christian defenders draped all over him. (Contributed)

Evangel won the Alabama Christian Sports Conference eight-man football league title last year with ease behind a tremendous three-person offensive line and the athleticism of do-everything quarterback Micah Murphy. While all three of Evangel’s linemen graduated, Murphy is back for his senior season as is running mate Brad Baggett, and the two combined to have quite the day in both halves of the Gridiron Classic.

Evangel is now able to play 11-man football thanks to a ruling by the AISA back in December of 2015. The AISA has not allowed its member teams to play teams outside of the AISA for many years, but on Dec. 9, 2015 the AISA Athletic Committee voted unanimously to designate teams specifically within the ACSC as acceptable nonconference opponents. Now, AISA teams can put ACSC teams on their schedules for the first time, meaning schools like Evangel and Hope Christian will have to step up to the 11-man game when playing AISA competition.

The ruling particularly helps the three AISA schools in Shelby County, namely Kingwood, Coosa Valley and Cornerstone, as well as the two ACSC schools in the county, Evangel and Hope. Before, when these teams were not allowed to play one another, it was not uncommon for any one of them to drive close to two hours each direction for a nonconference game. This ruling will significantly cut down on travel cost for all, assuming they schedule each other in the nonconference schedule.

In Evangel’s first true taste of 11-man football, the Lightning proved to be up to the task. Murphy ran 11 times in the first half against Evangel Christian Academy for 166 yards and two scores while Baggett scored on the ground as well. John Lloyd had five tackles in the first half, including one for a loss, to lead the defense.

In the second half, the Lightning smoked in-county opponent Kingwood. Murphy rushed just once against Kingwood for 25 yards, while Baggett rushed twice for 76 yards, scoring both times he touched the ball on the ground. Lloyd also had one rush for 44 yards and a score as well as Evangel beat Kingwood 28-0.

Ahmad Edwards had seven catches for 204 yards and two touchdowns in the Bulldogs’ spring game against Calera on May... read more