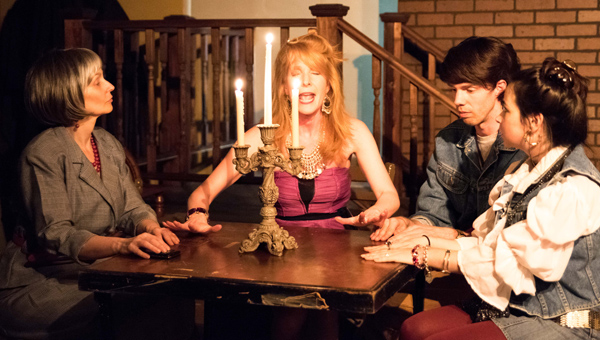 The quirky characters of “I Hate Hamlet” hold a séance to call on the spirit of the John Barrymore, who famously portrayed Hamlet in 1922. (For the Reporter/Keith McCoy)

PELHAM— With a cast of quirky characters and the ghost of a famous actor, South City Theatre is staging a comedy of Shakespearian proportions set to open in Pelham on June 3 at 7:30 p.m.

“I Hate Hamlet,” written by Paul Rudnick, centers around television star Andrew Rally and his girlfriend Deirdre McVay. When times got rough in TV, Rally decided to get back to his theatre roots and take on the role of Hamlet, despite his distaste for the role.

After his psychic Long Island real estate agent, 70-year-old agent and 29-year-old girlfriend host a séance, they conjure up one of the most famous Hamlet stars, John Barrymore, who comes back to help Rally play the part. 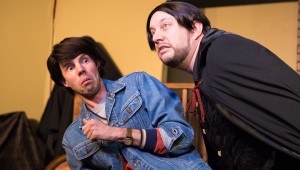 “It’s a very funny show. It’s very fast paced. There’s action; there’s a sword fight,” said Director Cliff Keen. “People get afraid of Shakespeare sometimes…but don’t be afraid of that because this is just a show about Shakespeare, about Hamlet. (Audiences) are going to get a lot of enjoyment. It’s a very funny comedy.”

Keen was in a performance of the show 15 years ago when he played the part of Barrymore, now being played by JJ Marrs. He said being on the opposite side of the show and working with the cast has been a hoot.

When working with the cast, Keen said his first priority is character. As the resident director in Leeds, and a veteran director and actor at South City Theatre, Keen said he looks at casting as the most important thing.

“You want to make sure you cast the right people to convey those characters so you can see something in them,” he said, adding that he’s worked with three of the actors previously.

For Brunson, getting into character wasn’t too hard. As an actor who doesn’t particularly like “Hamlet,” Brunson said portraying Rally wasn’t a stretch.

“He’s not been too unusual,” he said. “This is a very normal person compared to what I usually play. I’m usually playing more wacky people. It’s been nice to be someone normal for once.”

As the cast prepares for opening night, Keen said he’s looking forward to seeing it all come together. He said his favorite part is seeing everything mesh—the blocking, acting, character work and lighting.

“You start to see everything come together…it’s that moment when everything starts meshing,” Keen said. “You start seeing the characters come out.”

Tickets are $16 for adults and $13 for students and seniors. Groups of 10 or more may pay in advance $10 per person. To purchase tickets, call the box office at 621-2128 or email info@southcitytheatre.com.

The CityFest 5K will return to Alabaster’s Larry Simmons Stadium this Saturday. (File) By DEB WOODBERRY / Special to the... read more