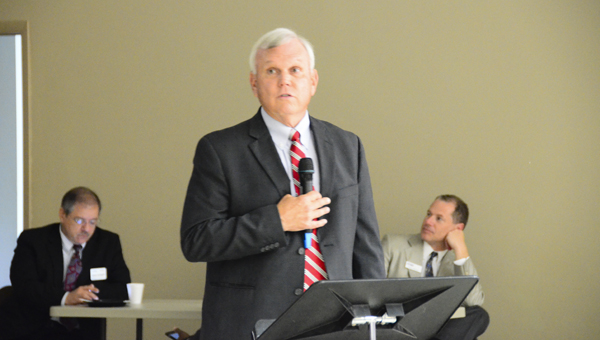 COLUMBIANA – Excellence is one of the primary factors to which Shelby County Schools Superintendent Randy Fuller attributed the school system’s success regarding student achievement, staffing, capital improvements and other facets of education.

“Shelby County Schools are a model for excellence in education,” Fuller said in his State of the Schools address at a June 2 South Shelby Chamber of Commerce luncheon. “You have to be intentional about excellence. You have to work for excellence or it won’t come.”

Fuller started with a breakdown of the school system, which comprises 31 schools in seven school zones, with a total student enrollment of 20,039.

“We are going to provide every student in those schools with opportunities for success,” Fuller said.

Other components of the plan include:

•The addition of 10 classrooms at Chelsea High School.

•Interior renovations for conversion to an intermediate school at Calera Intermediate.

•The addition of 17 classrooms at Helena Intermediate.

•The addition of 10 classrooms at Mt Laurel Elementary.

•New gymnasium and renovation of the library at Wilsonville Elementary.

Capital improvement projects planned for 2016-2018 include the addition of 20 classrooms at Chelsea High School; cafeteria and kitchen renovations at Elvin Hill Elementary, Calera Intermediate and Montevallo Middle; and security improvements at the Central Office and Shelby County Instructional Services Center.

“We felt it was very important we had a road map,” Fuller said. “Without a road map, we can’t go anywhere.”

Fuller said for the first time ever, SCS boasted a 95-percent graduation rate for the 2014-2015, and no school had a rate under 90 percent.

“We’re asking students to take ownership of their learning,” Fuller said. “This is going to take a collaborative effort from everyone in the community. If you want it to happen, you have to join us to make it happen.”

Fuller recognized the local chambers of commerce and municipal leaders for their contributions to the school system.