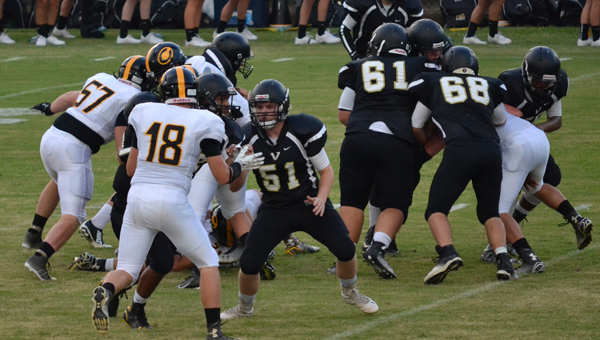 The Vincent Yellow Jackets will look to rebound from their winless 2015 campaign in 2016. (File)

VINCENT – New Vincent head football coach Wiley McKeller knows there is quite a journey ahead for his football team. McKeller, who spent the last five seasons at Calera High School accumulating a 39-17 overall record, took over as Vincent’s new head coach in December, and is in the beginning stages of rebuilding the Yellow Jacket program. Vincent made a playoff appearance in each season from 2009-2014 save for one, and has a history of being a competitive team, however the Yellow Jackets went winless in 2015, and did not score a point in six of their 10 games. Now, McKeller is attempting to breath new life into the program, and one of the first steps came with the successful completion of spring practice.

“The spring went better than I expected,”McKeller said. “We handed out 78 helmets, we got kids out. I know not all of those kids are going to stick with it, that’s fine. If I can carry a couple dozen kids on the middle school team and 35-40 on the high school team, that’s pretty good. The biggest thing now is learning how to do stuff. We’re not there yet, but we’re closer than we were yesterday. We just want to get better every day.”

One of the ways McKeller is trying to give Vincent a shot in the arm is by updating equipment that, McKeller said, was in dire need of an upgrade.

“There were some major equipment updates that needed to happen, just from a safety standpoint,” McKeller said. “We were in dire need of new helmets and general padware. It just needed updating.”

Also, in an effort to expose his kids to some top-tier programs, McKeller is taking his team to bigger, more competitive camps in the summer to give his players a sense of how other programs operate.

Looking ahead to 2016, McKeller has already identified a few players who will be relied on heavily this fall. Robbie Albright, the do-everything rising sophomore who plays football and baseball for Vincent, has potential to be the best linebacker McKeller has ever coached, he said. Zeb McCord, all 6-feet-4-inches of him, will be back to lead the offensive line, and names like Zavien Kelley, Josef Greene and Deandre Green impressed in spring ball as well.

Vincent, which is moving from 2A Region 4 to 2A Region 5 this year, will kick off the 2016 season on Aug. 19 at Pleasant Valley, and will be home for the first time on Sept. 2, when the Yellow Jackets welcome in new regional opponent LaFayette.

Oak Mountain’s Joseph Hartsfield helped lead the Eagles to the most wins in program history in 2016. (File) By BAKER... read more