Pack named Player of the Year 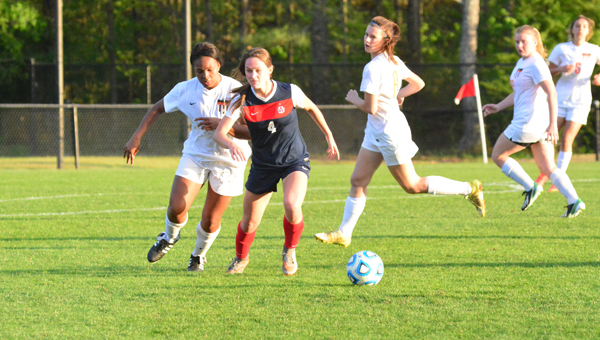 Oak Mountain’s Julia Pack scored 19 goals and assisted on 17 more in her sophomore season, was named the Gatorade Player of the Year in the state of Alabama and is the 2016 Shelby County girls soccer Player of the Year. (File)

Over the past five years, Oak Mountain has been the dominant boys and girls soccer force across the landscape of the larger schools in Alabama. The boys’ and girls’ programs have combined for six state titles since 2011, and both programs have won two of the last three state titles in their classifications. The soccer culture is thriving at Oak Mountain thanks in large part to the coaching, community and school support, but mostly because the Eagles’ soccer rosters are always chalk-full of top talent.

The girls program definitely has seen some top players pass through the ranks over the years, from names like Bailey Hartnett and Toni Payne to more recent studs like Katie Denney and Nealy Martin, the Lady Eagles have more often that not fielded one of the most talented rosters around. That trend was no different this year, and chief among Oak Mountain’s list of prospects in 2016 was sophomore sensation Julia Pack.

Pack, a rising junior, has been an Oak Mountain mainstay since her eighth grade season, when the Lady Eagles went 26-0-1 and won the 6A state title. Maxpreps.com declared that Oak Mountain team high school national champions, and Pack was named the team MVP by her teammates that year, before she had spent a day in the high school. From that time forward she has been one of the premier players in the state, and after her sophomore season, she is the 2016 Shelby County Player of the Year.

This season Pack accumulated 19 goals and 17 assists from her center mid position, good for 55 total points, and helped lead Oak Mountain to a 22-4-1 finish. Those individual numbers themselves are impressive, but not necessarily otherworldly. To get a better idea of the impact Pack has on the field, its important to hear from those who understand her game the best.

Oak Mountain head girls soccer coach David DiPiazza, who has won 12 Alabama high school state titles as a player and a coach, has said repeatedly that Pack is the best player he has ever coached.

“She’s the best player I’ve ever coached,” DiPiazza said in April. “She’s an extremely intelligent soccer player, her detail and her study of the game is incredible. She’s a very intelligent player, but what she can do with the ball is nothing I’ve ever really seen a girl soccer player do. Her thought, her ability to hit a pass, the weight of the pass, the accuracy of the pass, she does things with a ball that I’ve probably seen three high school players do who play her position.”

Pack was also named the Gatorade Player of the Year in the state of Alabama on May 17, and has firmly established herself as one of the premier prep players across the Southeastern United States. She has spent time playing Olympic Development soccer, as top high school players are wont to do, and has also spent time playing on the ODP Region III team, a team comprised of the best ODP players from 11 states across the South, and has traveled to Costa Rica to play international soccer.

“Julia Pack elevates the play of her teammates from average to great,” Will Patridge, head girls coach at Hoover, said in the Gatorade Player of the Year press release. “Against Oak Mountain, you have to know where Julia is at all times. She is a talented player with a high soccer IQ that can adapt her playing style on the fly to give teams fits.”

Pack is a verbal commit to play her college soccer at Auburn, and has been since her freshman year. However, before she leaves the prep ranks she has two more seasons to make her mark on the high school landscape, and as long as she is in the midfield, Oak Mountain will remain a force to be reckoned with. The Gatorade Player of the Year in the state, Julia Pack is also the Player of the Year in the county.

Hammett named Coach of the Year

Jonathan Hammett (center) led his Chelsea Lady Hornets to a season-ending No. 3 ranking in 6A with a 13-8 record,... read more