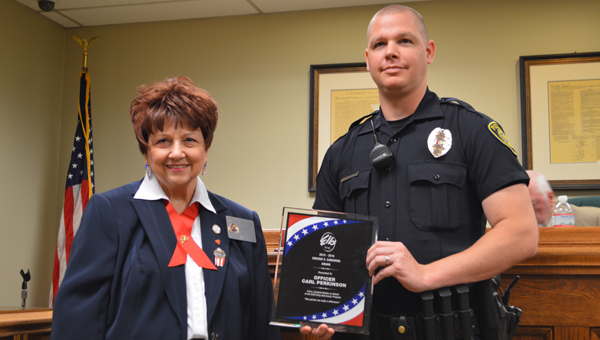 She presented Officer Carl Perkinson with the Enrique Camarena Award for his work with drug abuse programs.

“I appreciate it,” Perkinson said. “Winning this award, I thank everyone who was involved with it. I thank Chief (Larry Palmer) for bringing me into the Pelham family, my wife for standing behind me, my two awesome kids.”

The award was created by the national Elks organization, the Benevolent and Protective Order of Elks, to honor Enrique Camarena, according to Shinpaugh. Camarena was an American citizen who was born in Mexico and became an undercover DEA agent.

Shinpaugh said Camarena was an exceptional agent, but he was kidnapped in 1985 and tortured. He eventually passed from his injuries.

“He was so loved by the community and the Elks for his efforts with drug awareness that they established this award,” Shinpaugh said. “As it says on the bottom (of the award), ‘One person can make a difference.’”

As a Pelham-based organization, Shinpaugh said the Cahaba Valley Elks were pleased to be able to honor one of the officers who helps keep the citizens of Pelham safe.

Perkinson was first presented with the national award at the state convention in Huntsville.

“We’ve worked so much with the City Council, it’s nice to be able to give back to one of your own,” Shinpaugh said.  “We are so honored by your service to help keep us safe.”