Pickleball picking up steam in Chelsea 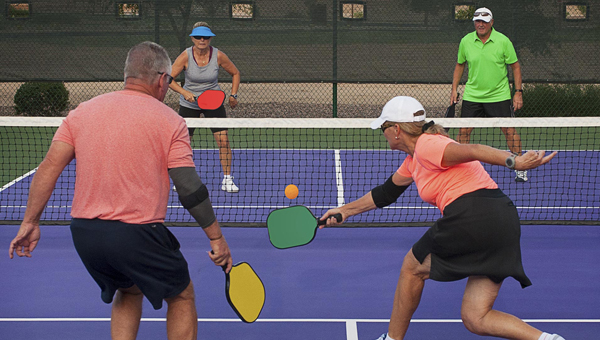 Pickleball is one of the country’s fastest-growing sports, and has found a home at the Chelsea Community Center. (Contributed)

CHELSEA – Kay Colgan first got introduced to pickleball in November of 2015. The retired cost analyst for the United States Army was introduced to the sport by a golfing friend, and fell in love with it immediately. Now, she is one of the biggest advocates for pickleball in the Birmingham area, and serves as the pickleball volunteer coordinator at the Chelsea Community Center.

“Pickleball is great in that it is for all ages,” Colgan said. “You can play it outside on a tennis court, you can play it inside on a gym floor. It’s addictive too, it really is. For senior people it’s great because you can still play a sport and be competitive.”

Pickleball draws its origins from Washington state and was conceived in 1960 when future state representative Joel Pitchard developed an early version of the game with his family on vacation. The game, as it is played today, is played on a court similar in size to that of a badminton court, with a shortened tennis net that extends three feet off the ground. Teams of two compete against each other in games to 11, and the game is played with a wiffle ball and paddles that resemble oversized table tennis paddles.

“It’s really a good sport, especially for seniors,” Colgan said. “It’s very easy to pick up and you see improvement immediately. It gives people positive reinforcement, because they get better and say ‘I want to do that again.’ It’s competitive, and a lot of seniors say that it’s given them a lot of friends. It’s great from a social aspect as well.”

Now, every Wednesday and Friday from 9 a.m. to 1 p.m., Colgan and a slowly growing group can be found at the Chelsea Community Center on County Road 47, engrossed in games of two-v-two.

The sport has spread quickly across the country over the last decade, but has grown slowly in Alabama. The Chelsea Community Center is one of the few places in the Birmingham area to offer on a regular basis, and the pickleball community would like to see its’ numbers increase.

“We really want to get it out there to get people to come,” Colgan said. “Our numbers have increased, but we want to invite anyone to come out and join us.”