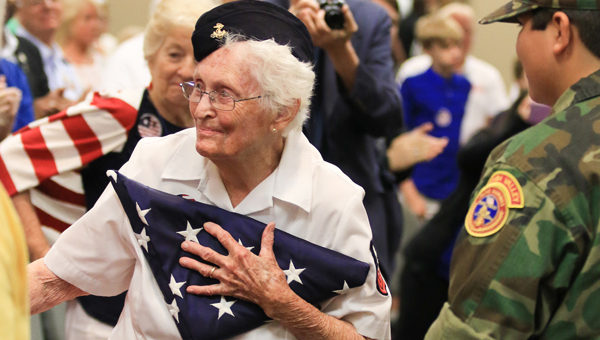 After an explanation of the Thirteen Folds of the American flag, the flag was presented to a former military mechanic, who is now nearly 100 years old. (For the Reporter/Dawn Harrison)

PELHAM— America pride was alive among residents June 12 as the city of Pelham and the Cahaba Valley Elks held the eighth annual Flag Day Celebration at the Pelham Civic Complex.

“Thank you for taking but a few hours out of your lives to do something ever so important,” said Pelham Mayor Gary Waters as he welcomed attendees to the ceremony. “Flag Day—it’s one of those obscure days that in the hustle and bustle of our culture and our society, we tend to overlook the importance of that day.”

Both Waters and Cahaba Valley Elks President, Barbara Shinpaugh, shared their personal meanings for Americanism and the meaning behind the United States flag, before the program kicked off with a musical performance by Homeland.

Attendees waved miniature American flags, provided by the Exchange Club of Shelby County and American Legion Matthew Blount Post 555, along with the patriotic songs of Homeland.

“I think it’s very important that our citizens continue to promote patriotism…many of the organizations in Shelby County promote love of country,” said Sharon Gaydon, one of the event coordinators. “This is specifically for the flag, and the program provides an opportunity to recognize young people who have displayed patriotism.”

Miss Alabama Hayley Barber, who was crowned just the night before, made her first public appearance at the Flag Day Ceremony. As a Pelham resident, Barber shared how special it was to be back in Pelham to celebrate the occasion with her fellow residents.

“Being Miss Alabama has been a dream of mine, so I want to thank all the service men and women who are fighting or have fought for my freedom so I can achieve my dreams,” Barber said. “You are fighting so that anybody can achieve their dreams no matter what that dream may be.”

Members of the Cahaba Valley Elks participated in a flag ritual, announcing the history and development of each United States flag.

Winners from the Elks Lodge youth activities, including Americanism Essay winners, scholarship winners and the lodge’s district winner to the Hoop Shoot Contest, helped carry the flags across the stage.

“Patriotism in America is like the heart is to the body,” Chelsea Middle School’s Brennen Wilder wrote in his winning essay. “The people of the United States are the heart and soul of the country….it is our duty as citizens to support, rally around and love the people and leaders of our great nation. The heartbeat of our country is the people.”

Military servicemen and the flags of each military branch were presented, along with an explanation of the Thirteen Folds of the American flag.

By NEAL WAGNER / Managing Editor ALABASTER – The founder and president of the Alabaster-based APH Radio station said he... read more