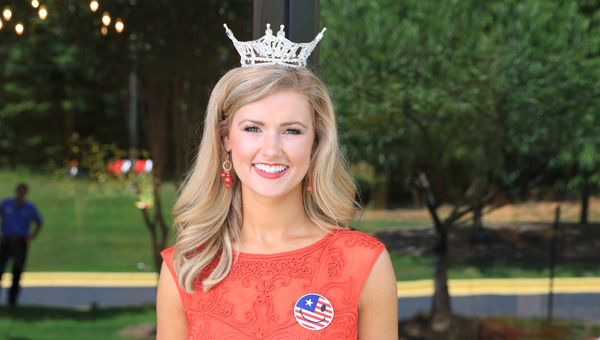 The 2016 Miss Shelby County Hayley Barber was crowned Miss Alabama on June 11. The Pelham resident will participate in the Miss America competition in three months. (For the Reporter/Dawn Harrison)

In three months, Pelham High School graduate Hayley Barber is competing in the Miss America Competition after being crowned Miss Alabama at a June 11 pageant.

As the 2016 Miss Shelby County, Barber is the first to win at the state level while still holding the Shelby County title.

Barber said this is her fifth year competing in the Miss Alabama Pageant, and she has earned more than 65,000 in scholarship funds during her stint with the organization.

During the pageant June 11, Barber said she was surprisingly calm leading up to being crowned.

“I was unbelievably calm. I had no anxiety about who would win,” she said. “I felt completely comfortable in God’s plan for my life, whatever that would be on Saturday night. When I won, I was shocked. I felt so ready for the job, but still could not believe it was reality.”

Barber explained the moment of being crowned as a nervous, exciting and shocking one all at once, and added this is the start of a “whirlwind of a year.”

She said she is most looking forward to sharing her community service platform, “Sight for Small Eyes.” She also plans to visit Children’s Hospitals regularly and serve as an advocate for Children’s Miracle Network Hospitals.

Barber will compete at the Miss America competition in three months, and she said she’s already begun her preparation. She’s also started booking appearances throughout the state for speaking engagements, talent performances or meet and greets.

To book Miss Alabama for an appearance, contact her appearance coordinator at missalappearances@gmail.com or 910-1117.

“I will work extremely hard to make our state proud,” she said.

The Alabaster Board of Education voted during its June 13 meeting to enact a salary increase for its employees, effective... read more