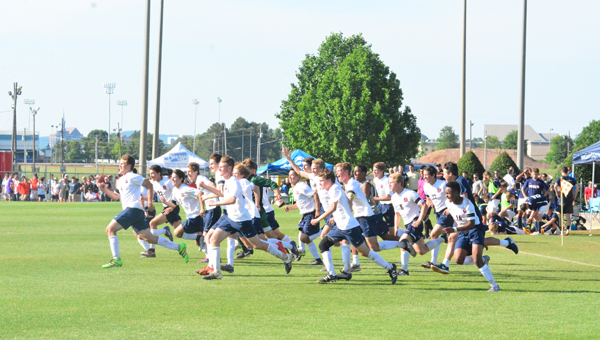 With nearly all of the prep spring sports seasons wrapped up around the country, Oak Mountain still stands as the top boys soccer team in the country from 2016. (File)

With nearly all of the spring sports prep seasons wrapped up across the country, the Oak Mountain boys soccer program still maintains its spot atop the national rankings. In the second-to-last rankings of the year put out by Topdrawersoccer.com, Oak Mountain is the No. 1 team in the country for the fourth week in a row.

Oak Mountain, which finished the 2016 season with a 28-0-2 record, stayed ahead of Washington-Lee (Va.), Heritage Hall (Ok.), River Bluff (SC.) and First Colonial (Va.), all of which stayed put in the top five positions from the previous week.

The Eagles were one of just four teams in the Topdrawersoccer.com rankings that did not lose a game this spring, along with Heritage Hall, Wesleyan School (Ga.) and Juan Diego Catholic (UT.). Oak Mountain’s 28 wins were also the most of any team in the top 50.

Over the last two seasons, Oak Mountain has posted a 51-4-3 record and has won two straight 7A state titles. The Eagles graduated their entire starting back line this spring as well as Shelby County Player of the Year Hunter Holstad, but will return sparkplug forward Kennedy Davis as well as 7A tournament MVP Chad Jeter and Jackson Murphy to the 2017 team.