Chelsea comes back to beat Shelby County in 8U district finals 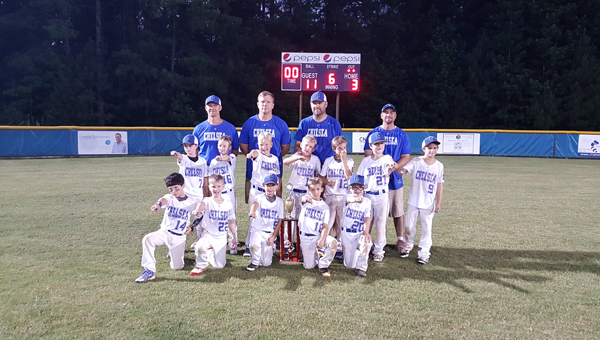 The 8U Chelsea powerhouse show off their rings after beating Shelby County in the 8U district finals on June 21. (Contributed)

CHELSEA – It’s been called the toughest district in Dizzy Dean youth baseball play, so it was only fitting that the Chelsea Powerhouse ended up facing Shelby County in the 8U district finals on Tuesday night in Chelsea.

Shelby County stunned the Powerhouse on their home field in the first round with a one-run victory, knocking the Powerhouse into the loser’s bracket. Shelby County then continued their dominant run to the finals with a hard fought win over the Chelsea Rec N’ Ballz in the semi-finals. It was a tight game before Shelby County first baseman Cooper Pennington belted an inside fastball about 260 feet over the trees in centerfield. Pennington became only the fourth player to hit one out of David Ingram Field in the last 11 years.

“In the game against Chelsea Blue, I was happy to see our kids break it open late with some big hits and defensive plays,” Shelby County head coach Ricky Ruzztun said. “Cooper’s home run blast really helped with that momentum.” 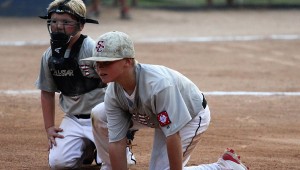 Shelby County earned the winners bracket finalist position for the tournament, meaning that they had to win just one out of the next two games to be declared champions.

Powerhouse coach Chris Moller knew what he was up against in the championship game and decided to make a few game day changes. For starters, he installed the “Connect Four” shift when Shelby County bomber AJ Pickett was up to bat. Pickett had been huge in the first matchup between the two, with multiple deep blasts to left field, and the shift was meant to limit his effectiveness.

The new wrinkle however was not implemented during Pickett’s first at-bat, and he took a two-seam fastball to the center field wall for a double. However, Moller’s shift paid off during Pickett’s next three at bats as his outfielders were able to snag a couple of Pickett’s blasts. In the first championship game, the Powerhouse avenged their earlier loss to Shelby County, winning 16-5 to force a sudden death, winner-take-all championship match.

The Powerhouse, known for the long ball, played a little small ball to get on top of Shelby County in the championship. Outfielder Graham Steel and pitcher Cooper Evans laid down beautiful bunts down the third base line, which was all Moller’s lineup needed as big hitters Brian “Thunda” Dockery, Ethan Prickett, Jake McArthur and Evan Moller were hitting lasers to the outfield.

Chelsea catcher Ethan Prickett was great from the plate all night long. He one-hopped the fence in left both games and had four RBI. Dockery had a number of scoops at his first base position that could have posed trouble for the Powerhouse if they had managed to get by him.

The Powerhouse won the championship game 11-3. Moller talked about the uphill battle his team faced after dropping the tournament opener.

“I’m proud of all 12 of our boys,” Moller said. “After losing to Shelby County in the first round, they knew it was going to be an uphill battle to win eight straight games. As each game went on, it seemed like we had a different kid get a big hit or make an important defensive play. It was very rewarding to watch Cooper Johnsey overcome a missed opportunity on Friday night to him providing the championship clinching hit on Tuesday.”

Shelby County pitcher Tyler Young is quickly becoming a fan favorite. Young burst onto the scene last weekend with an outstanding week in the Summa Sizzla tournament. His opposite field mash in the semifinal game against Irondale was one of the highlights of that tournament.

Ruzztun was proud to see his team fight through the 15-team tourney.

“Following our Friday night win against the Powerhouse, I knew that whoever made it through the winners bracket would have to play them again,” Ruzztun said. “We didn’t play our best in the championship game. But, give credit to Coach Moller, Coach McArthur, Coach Anderson and Coach Lemons from the Powerhouse. They do a great job to make sure that team is solid in every position.”

Chelsea Farm League baseball commissioner Marc Hollifield was a little surprised to see so many quality baseball teams in the same tournament. “

We knew that we had a big district this year with 15 teams playing,” Hollifield said. “The fans got a big treat to see that championship game. That was great baseball by two very good teams. It was just a loaded field. Very similar to our tourney the previous week, the Summa Sizzla.”

By BAKER ELLIS / Sports Editor The start of the 2016-17 basketball season is roughly five months away, but that... read more