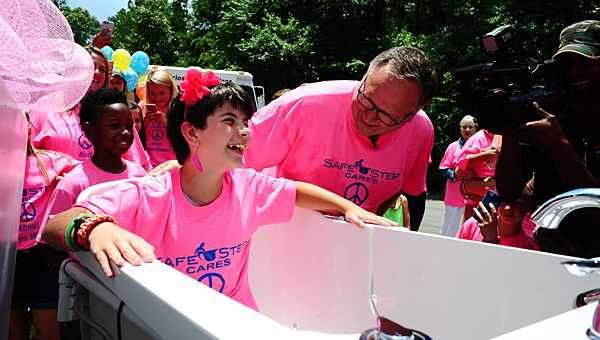 On June 23, the Safe Step Walk-in Tub company found a way to incorporate all three into one of the biggest surprises Kaitlyn had ever experienced.

When returning to her house from a five-day hemophilia camp in Alexander City, Kaitlyn was greeted by a few dozen of her closest friends, supporters and family members as they celebrated the company’s gift to the Weaver family.

As Kaitlyn arrived at the house at about 1 p.m. riding in her mother, Michelle’s, car, Safe Step lifted a large box sitting in the front yard to unveil a new walk-in therapeutic tub.

After Kaitlyn – who was all smiles throughout the afternoon – sat in the model tub for the first time, the company unveiled another surprise: The real tub was already installed in her bathroom.

A short time later, Kaitlyn got a demonstration on how to operate the tub from Safe Step representatives Phil Melfa and Derek Farley. And to add a custom touch to the tub, the company placed a logo on the front depicting a peace sign, a heart and a dog paw, and ensured LED lights would illuminate the water pink, among other colors.

“It will feel amazing, especially with the arthritis in my feet,” said Kaitlyn, as she looked down at the medical boot on her foot.

For Kaitlyn, the tub is especially meaningful.

For the past five years, she has battled multiple disorders including juvenile rheumatoid arthritis, hemophilia, which prevents her blood from clotting correctly, and Ehlers-Danlos syndrome, an autoimmune disorder causing her blood vessels to become damaged easily.

“One thing that really hit me was when her dad, Scott, said ‘As a dad, I’m supposed to be able to fix everything, and I can’t fix this,’” Melfa said, referencing the video. “I started balling right there in my driveway, and I said, ‘We are going to do something great to help this family.’”

Safe Step donates about one tub a month to families in need across the country through its “Safe Step Cares” program, but the ceremonies typically are small family affairs.

For several weeks, the Weavers worked to invite everyone they could to Kaitlyn’s surprise ceremony. In addition to friends, family members and neighbors all wearing matching pink shirts, the event also drew the Alabaster police and fire departments, the Alabaster mayor, members of the Thompson High School marching band, the Frio’s Gourmet Pops truck, UAB volleyball players, local cheerleaders and more.

Scott Weaver said the tub will greatly help Kaitlyn, who has difficulty standing in a shower.

“The biggest thing is that it will create a better quality of life for her,” he said.

To donate to help the Weaver family with Kaitlyn’s medical expenses, visit Gofundme.com/KaitlynWeaver.

The Alabama Wildlife Center’s end-of-summer “Back to School” camp allows students to discover all aspects of nature in Oak Mountain... read more