CHELSEA – Chelsea City councilman Tony Picklesimer cited a love for the city and a desire to help it grow in the business, infrastructure and population sectors as factors in his decision to run for mayor this year.

“When I first ran for council, I had no intention of being mayor,” Picklesimer said. “But I have grown to love the whole process of the city, and I want to help it grow. I have a vision in my mind of what Chelsea can be.” 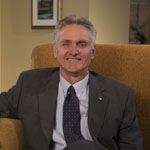 Picklesimer is serving his third term on the City Council. Initially, he was appointed to complete the term of the late Col. John Ritchie after he retired, and Picklesimer then was elected by the council to serve as mayor pro tem during his second term.

“I’ve actually been thinking about running for mayor for about five years now, but I chose not to run against Mayor (Earl) Niven in the 2012 election and just ran for my council seat,” Picklesimer said. “Actually, the hard decision to run for mayor in 2016 was made in 2014. I had the desire to give back to community and the area that has allowed me to make a living.”

Picklesimer owned a business in Sylacauga for 14 years prior to selling it and moving to Chelsea in 2006. For the first time, he and his wife Cindy had the option to live anywhere they wanted to, and they chose Chelsea.

“I have loved and admired Chelsea for 20-plus years now,” Picklesimer said. “I have watched Chelsea grow from a distance and have always admired Chelsea. We chose Chelsea because of the friendly, small-town atmosphere, but (also because of) all of the conveniences that Chelsea has to offer, and I knew Chelsea was going to grow into a place that would eventually be self-sufficient business-wise. We’re headed in that direction.”

Picklesimer said the city needs “a promoter,” or someone to get out and promote all of the good things Chelsea has to offer, and to “draw in more businesses, to continue to manage the people growth and to grow infrastructure to take care of people growth.”

“It’s a great city now, but I think there’s so much more available,” Picklesimer said.

In addition, he said he wants to continue to support the city’s contract with the Shelby County Sheriff’s Office for law enforcement and to expand fire and rescue services by adding a fire station to the west part of the city to “close the circle of coverage” needed.

“I feel like the primary responsibility of municipal government is to keep citizens safe,” Picklesimer said. “I have a vision to make all those things happen.”

Another piece of Picklesimer’s plans is to continue partnering with the Shelby County Board of Education on construction and improvement projects for Chelsea schools.

Regarding city facilities, Picklesimer stressed the importance of maintenance and offerings for all residents. With phase 1 of the new sports complex off Shelby County 11 nearing completion, he said the city must start looking at phase 2 plans.

“I also feel strongly that we need to maintain infrastructure and maintain facilities,” he said. “We need to have a community center that’s clean, functional and offers programs for all ages.”

Other issues Picklesimer intends to address are unfinished roads in local subdivisions and traffic in the city.

“Our streets and roads need some attention,” he said. “ALDOT has control of U.S. 280, but we need to make our wishes known, what we want to see happen with the roads in our city, even though they’re under the control of ALDOT. There are traffic issues that need to be addressed.

“We have subdivisions that need roadwork. Those citizens need us to step up and help them. It’s not their fault the developers went out of business during the recession.”

Picklesimer said he promises no property tax will be added, but the city needs to manage its money well.

“We have a multi-million-dollar budget and have 50 employees,” he added. “I’ve experienced that in owning my business. I’ve worked with large budgets.”

Picklesimer and his wife of 39 years, Cindy, have two sons, two daughters-in-law and five grandchildren.

Since he is running for mayor, Picklesimer is not seeking re-election to the place 2 seat on the City Council.

“No one knows how to be mayor of Chelsea except Earl Niven, but I believe I’m the most qualified and have the right circle of experience to step into that job and to take Chelsea forward,” Picklesimer said.